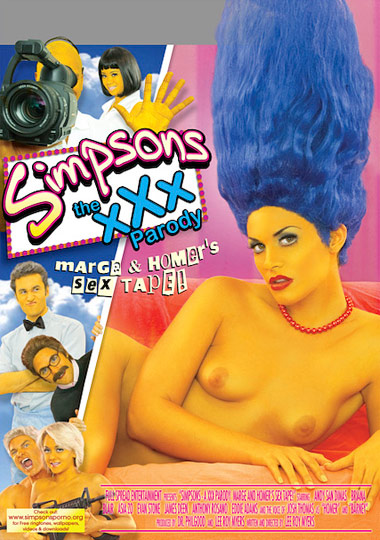 As the movie begins, Homer (Anthony Rosano, but we see little of him because he’s usually behind the camera) trades the sex tape he and Marge made for a bag of doughnuts. The rest of the movie is a look at the illicit footage itself. Marge, posing in front of a full-length mirror with the camera behind her, feels frisky about the sexual possibilities that arise thanks to the new camcorder. Something else arises in Homer’s pants once he finally realizes Marge is telling him she wants to make a sex tape. She lets her hair down and starts to blow him, her dirty talk adding lots of excitement. Just as it’s getting hot, Homer’s attention wanders to the TV, where a McBain porno has just started playing.

Homer films Marge while she’s dusting and talks her into flashing some lemony ass cheek, against her better judgment – she worries that a neighbor could walk in at any minute. Sure enough, Moe (James Deen, looking better than cartoon Moe but definitely sounding the part) barges in and finds out Marge wears a magenta thong under that green dress! Moe is here to borrow the camcorder for a hot date with real estate agent Cookie Kwan (Asia Zo). Never mind that Cookie thinks she’s there to appraise his apartment, because Moe talks her into fucking him by lying that he’s actually rich and he only looks ugly because he wears a mask to hide his true good looks. Gold-digging, ambitious Cookie can’t jump his bones fast enough after that. He rubs her clit while playing with her perky tits and she gives him a hot blowjob. Then Cookie proves that not only is she number one on the west side, but also number one on her back side, front side… any side on which she takes Moe’s energetic thrusts.

At least, that is until Marge shows the other girls how it’s done. Now that she and Homer have the camera back, they can finally film their frolicking. Homer appears to eat Marge out in P.O.V. style, with the camera giving us an intimate view of her mound. If you’ve always imagined that this blue-haired babe would be a tiger in bed, you’re right. Actually, she’s a tiger on the couch, but you get the picture. Marge fucks Homer’s shaft and then wants to taste her own juices on Homer’s cock for a while before doing it doggy style. They have sex in different positions, always showing Marge to her best advantage. Andy San Dimas stays in character (and voice) the whole time, and not even a blue wig and yellow body paint can diminish her extreme beauty and sex appeal. When Homer pops, Marge proves to be a dirty girl indeed, spitting it out on his cock and licking it back up to swallow.

Director Lee Roy Myers has captured the hilarious essence of yet another pop culture institution with this first release from his self-titled studio. Everybody is well cast and the makeup is great, courtesy of talented industry makeup pro 2Ply. Josh Thomas does note-perfect voice impersonations of Homer and Barney (who we never see, but he’s helping Moe film his tryst with Cookie through a hole in the wall). This is a “Simpsons” parody that should amuse you and satisfy your curiosity.