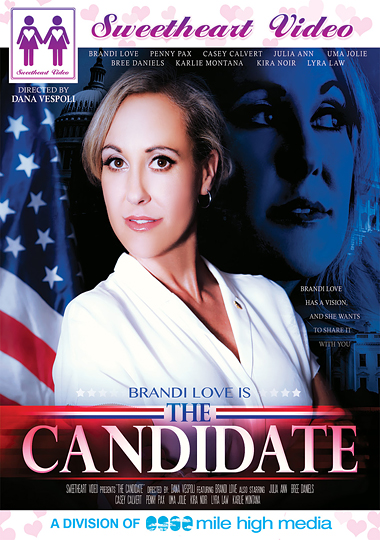 Democratic Senator Jen Hanlon (beautiful blonde Brandi Love) is running for US president. Hanlon was raised by a single mother, is a former volunteer firefighter, has a stellar legal career, and is a popular senator. Her opponent, Republican Senator Trip Mathis (Alec Knight), needs something to tarnish Hanlon’s halo, so one of his aides (Brock Doom) creates a scandal. Mathis doesn’t know it yet but he’s set events in motion that will change his life, and not in a good way.

Meanwhile, Senator Hanlon is hiding a long-term lesbian relationship with Supreme Court Justice Beth Pellegrino (Julia Ann). Their sex is smoking hot, as we see when they both get home after a long day. The two busty blondes take their time getting out of their clothes, kissing each other’s huge breasts, and licking each other’s smooth pussies. It’s a scene that could melt your screen, thanks to the outstanding chemistry between the two women. As they cuddle, Beth tries to talk Jen into going public with their relationship but Jen promises to do so after the election, no matter if she wins or loses.

Mathis’ lackeys make it more difficult for Hanlon to hide her sexuality, releasing a scandalous video that appears to show Hanlon in a lesbian threeway back in her college days. We see the video of three women, one of whom looks very much like Hanlon, along with a pale beauty with short red hair (Bree Daniels) and a hot, caramel-skinned brunette (Uma Jolie). If all homemade sex tapes were this hot, then maybe fewer public figures would be ashamed to release them.

Of course, Mathis has some skeletons in his own closet. He likes to hire call girls, but—whether it’s because he has a voyeurism fetish or because he wants to be hands-off—he only watches them put on a private show for him. First he hires Karlie Montana, who looks delicious in red lingerie and masturbates for him, so close he could join in but he doesn’t. Later, he hires a pair of hotties (Kira Noir and Lyra Louvel) to have sex for his viewing enjoyment.

Meanwhile, Mathis doesn’t know that something is happening that will change not only his political fortunes, but also his entire life. No spoilers here, but it’s what makes this a political thriller and not just a sexy drama. The entire cast shines in the conclusion of The Candidate, and you will want to see how it all unfolds.