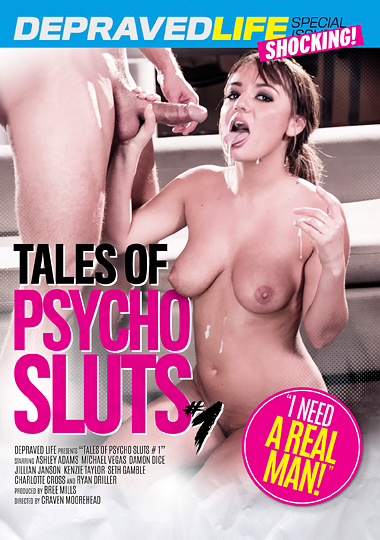 Depraved Life, a studio that is new to AEBN, presents four scenes of girls who are wild or just not quite right, except when it comes to the way they fuck. Tales of Psycho Sluts is all about some hot women throwing caution to the wind, fucking men they wouldn’t normally fuck or seducing men into fucking them against their better judgment.

Ashley Adams wants to go to a party with her friends so she can finally fuck the guy she wants, but they keep leaving every place she was supposed to meet them, and her driver (Michael Vegas) is fed up with it. Her credit card is declined, leaving her with a $429 bill and an angry driver who wants to dump her there in the middle of nowhere with no cell service. She’s acted so cold to him all evening, but now he wants some of that hot body. Ashley will do anything for a ride home at this point, so Michael takes out his frustration on her tight pussy. She might not be fucking the guy she thought she was going to, but his big dick is long, hard, and hits the spot that makes her squirt!

Jillian Janson dragged her boyfriend to the mall for hours. He’s pissed off that he’s missing the game, but she’s even more pissed off that he wants to treat her like a waitress for him and his friend (Damon Dice). Jillian decides that she likes the look of Damon and lures him into the bedroom under the ruse of helping her get some chips and dip. It turns out she does want help, but not in the kitchen. Damon doesn’t want to fuck his best friend’s girl in his best friend’s bed, but Jillian is very persuasive with those dick-sucking lips. She looks super fine in her crop top and tight leggings, and Damon makes the decision with his little head. He gets hard in her mouth and even harder when he plays with her small, perky tits. After Damon gets Jillian’s pussy wet with his tongue and warms up her pussy with his fingers, he gives her multiple orgasms through a series of sexual positions before cumming all over her chest and in her mouth.

Sergeant detective Seth Gamble is checking over Kenzie Taylor’s case file following her arrest last night. The officers didn’t follow procedure when they arrested Kenzie, so he has to release her with no psych evaluation. The sight of this hot blonde in handcuffs is very alluring but he has to let her go. Kenzie is glad to be free but she still wants Seth’s dick. She begins calling him fifteen times a day, but she finally stops when he threatens to have her arrested for stalking. Kenzie has gotten into Seth’s head, though, and he ends up going to her house to confront her. He accuses her of being a psychopath and she just tells him he’s cute when he’s upset. Seth finally decides that to play rough. He puts a hand around her throat, but Kenzie is unfazed, so he starts to face-fuck her roughly. Kenzie takes his cock deep in her throat while getting naked. While she rides his cock, he spanks her ass. Kenzie masturbates furiously while fucking him in reverse cowgirl, screaming as she cums. Seth pounds her in doggy style and jizzes outside her pussy.

Ryan Driller confronts his younger stepmother, hot brunette Charlotte O’Ryan, while she’s enjoying a bath. His dad is in prison, awaiting federal trial, and she’s just chilling like there’s nothing wrong. Charlotte gets out of the tub and struts naked onto the balcony, which only riles Ryan up more because she ought not to draw attention to herself. She tries to convince Ryan that their lawyers are the best in town and they’re going to be fine, but Ryan just wants her back in the house. Charlotte comes back inside but she stays naked. Ryan starts trying to cover her body with his jacket, but she just throws it off and keeps trying to seduce him with her nudity. He accuses Charlotte of being a gold digger and points out how convenient it is that she married his dad right before he went to prison. Charlotte calls his bluff when Ryan tries to threaten her and ends up getting what she wants out of him: his dick in her mouth and her pussy, and his cum all up in her greedy mouth!

Tales of Psycho Sluts is now streaming on AEBN.