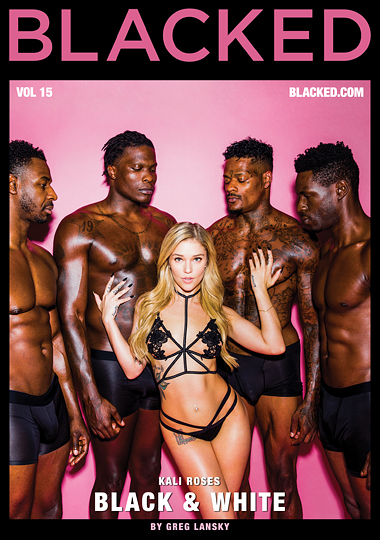 The latest release from one of Blacked’s most popular series, “Black and White 15” piqued our interest from the moment we saw gorgeous Kali Roses on the box cover flanked by four muscular Black studs. It’s one of four phenomenal scenes that are in store for you when you press play.

Cute blonde Khloe Kapri has a sweet arrangement with her boss, Jason Luv. After he caught her stealing cash, he offered to let her off the hook and be her sugar daddy, an offer that it was hard to refuse. He’s her first interracial relationship and he’s opening her up to a world of sexual experiences. It’s Valentine’s Day and he has texted her to meet him at an unfamiliar address. When Prince Yahshua answers the door, she finds out that this is her romantic surprise. “Why don’t you show my friend how much you like chocolate?” Jason says, and Khloe takes out Prince’s huge BBC to start sucking. Just seconds later, Khloe has both men’s dicks to play with and she couldn’t be happier. During an energetic jousting session, she tests her gag reflex on both, blows spit bubbles, and doesn’t neglect the balls. Jason and Prince reward her for the oral pleasures by eating her out and then taking turns fucking her pussy. Prince gives her a creampie, which she happily tastes. Jason gives her a facial and Khloe sucks him clean.

Nicole Aniston is a take-charge kind of woman who knows what she wants, and that includes her sex life. She’s mature enough to handle no-strings hookups, like the one she has here with her new client, Jax Slayher, and his agent, Joss Lescaf. After Joss leaves the room, Nicole puts a move on Jax. Joss comes back in to find Nicole face-planting on Jax’s cock and is pleased to accept her invitation to join them. Nicole loves the feeling of getting spit-roasted, creamed, and face-painted.