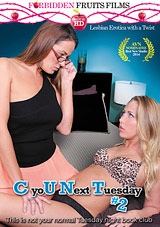 For the women of C yoU Next Tuesday 2, “book club” is a front for a… social group, let’s say. The first topic of discussion is the word “cunt” and why it’s sexy when a woman says it in reference to the body part, especially in the heat of passion.

Elexis Monroe lures club newcomer Amy Fair into bed and lets her know that the book club is about more than chatting. It’s a club for lesbians. Amy’s not a lesbian but she likes the women in the club, so Elexis introduces her to Sapphic sex. A pretty young brunette, Amy proves to be an eager learner who enjoys playing with Elexis’ generous breasts and getting head from a woman. After returning the oral favor, Amy finds out about tribbing (scissoring). The book club just gained a new member.

After the club meeting, Elexis and Carter reunite at home. They’re girlfriends and Carter has decided she’d rather not share Elexis after all. Elexis is having none of the jealousy, but she enjoys make-up sex with her younger blonde plaything all the same. Their chemistry is playful and they fuck like they’re in heat.

Savannah Steele is having Jodi over for coffee and confesses that her married sex life is nonexistent. Jodi tells her about book club and lets her in on its true nature. Savannah has never done more than kiss a woman, but Jodi’s hot sensuality gives her everything she’s been missing in her marriage. The two boobalicious, mature blondes are stunning together.

C yoU Next Tuesday 2 is streaming exclusively on our theatre network before you can see it anywhere else.