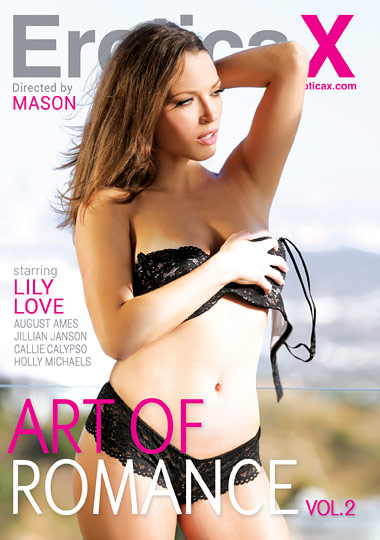 Erotica X has made a great name for itself since debuting last year with director Mason’s signature brand of stunningly beautiful sex scenes that feel natural, yet look like artfully erotic photo shoots happening before your wide-open eyes. Art of Romance 2 is a worthy successor to the first volume of the series with its emphasis on intimacy, both physical and emotional. You’ll see plenty of close-ups on the girls’ happy faces mixed in with wider shots of the action, with occasional close-ups of genitals. Everything flows as if the camera had just been set up and the action was allowed to unfold at the performers’ pace.

Outside, against a palm tree vista, Holly Michaels and Jillian Jackson tease each other in sexy black bras and panties. Inside, things progressively heat up as they kiss each other’s bodies and grind their pussies together. Holly’s on top, taking control, when James Deen joins them for some mutual oral and some exciting threeway fucking.

August Ames and Danny Mountain have been arguing. The best part about conflict when you’re a couple, of course, is making up afterward. These two work out their differences with intense make-up sex that has August hollering and moaning with pleasure. There’s no lack of passion for these two.

Art of Romance 2 is streaming on our VOD theatre network in high definition.