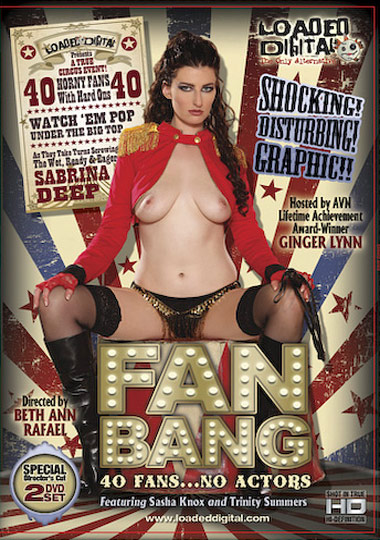 Two tattooed, rigid studs get first honors while the two fluffer babes get her next fans ready. Soon Sabrina is completely in her element. The first guys really get her heated up and she’s even more enthusiastic for the second pair, even if they are a bit less studly. One of these guys is so excited that he pops early, but hey, he can go to the back of the line and get himself worked up for another go-round.

Sabrina moves easily through the 40 guys, some of whom seem like naturals while others need coaching. This movie makes you appreciate that fucking for the cameras needs choreography just like dancing does. Some of the guys are hard enough to go for anal and Sabrina takes it all in stride as she slips deeper into cock drunkenness. Later, during a break to let the guys rest, Sabrina admits that taking it up the ass was her favorite part. Meanwhile, Ginger plays hostess and interviews some of the guys. When they come back from the break, we find out that all of this is happening on Sabrina’s birthday! What a way to party, eh?