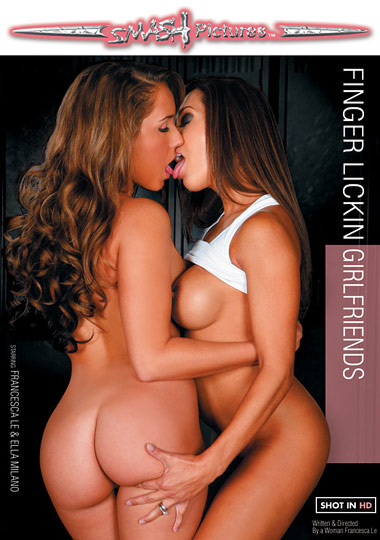 “Finger Lickin’ Girlfriends” is the latest all-girl movie from the increasingly awesome Smash Pictures. With great results, Francesca Le brings a performer’s perspective to the director’s seat. Each scene has a hint of plot, enough to give context, and even the opening chit-chat is sexy.

Francesca Le is a hot cheerleading coach consoling her best cheerleader, Ella Milano, when she finds out Ella has been kissing the other girls and developing a bad reputation. As a good coach, Francesca offers an intriguing form of support. Francesca assures Ella that it’s normal to feel this way, but that some girls might not. Francesca offers to “let” Ella practice kissing with her. She’s careful not to specify that all kisses have to be on the lips, which is good because it’s hot watching Francesca and Ella take turns kissing each other’s nipples and tight bodies. Watching a sexy cheerleading coach and her cute head cheerleader eat out and finger-fuck each other is a fantasy come true.

Carolyn Reese is most beautifully playing with her pleasure zone in a bubble bath when Jessie Andrews barges in looking for some girl called Melissa, but Carolyn isn’t fazed. After calmly explaining that Melissa had to take care of some things, Carolyn says that she has taken care of something too, just now. Carolyn takes the opportunity to educate Jessie on “making yourself feel good” in the bath tub. Jessie is vocal in her appreciation of her older friend’s oral skills, and she’s great at returning the favor. If you like wet sex, don’t miss it.

Karlie Montana, looking like a lanky Katy Perry in pigtails, is having girl time with India Summer, who has set up a game of Twister. While they start the game, India grills Karlie on her sex life. The game is abandoned when India discovers that Karlie is getting no action from either sex. Their kissing is tender and sweet, with dancing tongues. The more experienced India takes the lead in playing with Karlie’s nipples and licking her clit, but Karlie gives back as good as she got. They stroke each other’s pussies side by side and finish up by tribbing atop the Twister board.