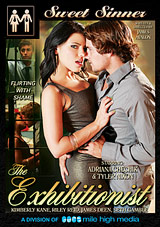 The Exhibitionist is a sensational feature for anyone who gets off on sex in front of windows – having it or watching it.

James Deen plays a voyeuristic political speechwriter married to Kimberly Kane. Gorgeous young brunette Adriana Chechik moves in next door and rekindles his shameful secret voyeurism. He reminisces fondly about spying on hot young Riley Reid as she fucked Seth Gamble. Now he peers through windows as Adriana brings home Tyler Nixon and fucks him. The next morning, when Adriana says goodbye to her fuck buddy, she gives James a knowing look that tells him she knows he was watching.

Turned on by Adriana’s smiling, silent approval of his voyeurism, James takes out his sexual excitement on Kimberly. He goes down on his wife and fucks her right in the laundry room after he sees her in a sheer blouse folding some clothes. They go at it hungrily against the washer and dryer and sorting table, and finally on the laundry room floor.

It turns out Adriana’s just as turned on by being watched as James is by watching. She asks him to spy on her again that night. James is flustered, but of course he can’t turn down an invitation like that. When he goes over, she puts on a solo show for him through the window. James ends up inside her bedroom, where he gets to do much more than watch.

The women are sexy and they truly enjoy fucking. This Sweet Sinner feature is streaming exclusively on our VOD network.