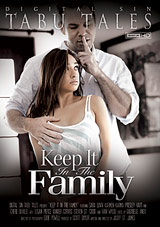 Tattooed, dark-haired hottie Karmen Karma is so into her stepbrother Van Wylde that she ties him up and coaxes him into fucking her. By the time she springs his cock from its fabric jail, it’s raging hard. Karmen easily gets Van to comply by sliding her cooch onto his boner. When she unties him, he’s eager to lick her pierced nipples, eat her out, and feel the wetness of her throat engulfing him. They fuck energetically with a few breaks for Karmen to taste her juices from his dick, and she swallows most of his load.

Cherie Deville is a blonde bombshell who wants to jump the bones of her timid but cute stepson, Logan Pierce. She throws him onto the bed and demands sexual satisfaction. Her excellent cock sucking soon silences his feeble protests, and when she gets naked he’s past the point of no return. Logan fucks Cherie in several positions, the hottest of which is doggy because that round ass looks phenomenal slamming against him.

Sara Luv is the gorgeous young brunette shown on the box cover. Her stepfather, Steven St. Croix, is obsessed with her and willing to get creepy in the process of getting into her shorts. When he makes her touch his raging rod, Sara claims she’s never sucked dick, but she’s got skills. Sara takes off her shorts and Steven’s in heaven as he finally gets to taste that muff he’s been craving. He gets her worked up and eager to take an active role in riding him, and she talks dirty to him until he coats her with spooge.

Beautiful Presley Hart constantly takes naked self-portraits with her smart phone. She gets on her stepbrother Xander Corvus’ bad side and makes the mistake of leaving her phone lying around, so he threatens to post the photos online. They strike a deal and Presley takes almost no convincing to blow her stepbrother. In fact it turns her on, and she enjoys the sensation of his tongue on her clit in return. Xander drills Presley’s pussy with a little choking. She rides him enthusiastically in cowgirl and takes a good-sized load on her face.

It’s shocking what goes on in some homes, but Keep It in the Family takes the taboo genre to new levels of beautiful sensuality.