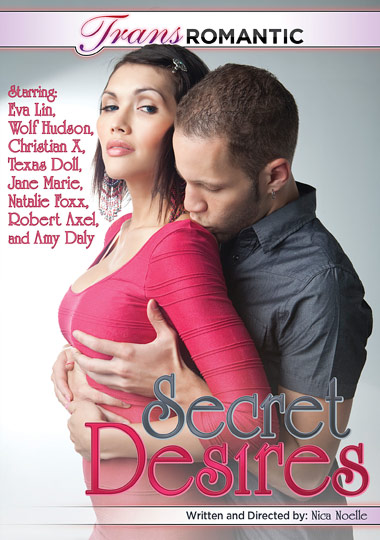 James (Wolf Hudson) is meeting his old friend Evan – but he’s shocked when a beautiful woman (Eva) walks in saying that she’s Evan. Eva wanted to tell him in person that she’s trans and says she’ll understand if he can’t handle it. James takes it in stride after the initial shock and tells her she’s hot. After dinner they go for drinks at the bar in Eva’s hotel. Eva won’t let James drive until he sobers up, so there’s plenty of time to get acquainted as they never were before. James tells Eva after that he regrets those years when they lost touch, which leads to a hug and kissing. After kissing Eva’s beautiful, full tits, James heads south. Eva hasn’t fully transitioned, and without missing a beat James orally pleasures her cock and balls. In return, Eva sucks and strokes James’ cock before he makes love to her from behind and in missionary. James plays with Eva’s ass while she beautifully strokes herself till she cums.

A lawyer (Christian XXX) calls for an escort, and who should walk in but his secretary, Natalie (Natalie). He doesn’t notice it’s her because he’s face down asking her for a massage. When he finally sees who it is, “Mr. Stevens” – the pseudonym he used – is in shock. Natalie says she escorts on the side because it excites her, and she doesn’t find it weird to fuck her boss. Mr. Stevens did request an escort using almost her exact description, so he decides to keep the date. They kiss with tongues for a while and then Natalie sucks his thick cock. Mr. Stevens is in for another surprise when he reaches between Natalie’s legs, but he strokes and sucks her cock without hesitation, then moves down to rim her cute little ass before fucking her in sidesaddle, cowgirl, and more.

Laura (popular trans porn star Amy Daly) is a babysitter whose boss, Robert (Robert Axel) wants company with his wife away on business. They chat over dinner and Robert reveals that his marriage isn’t as happy as Laura thinks. When Laura is about to head out, Robert helps her get her coat on, but soon enough it’s back off and so is the rest of her clothing. In bed, shy Laura turns a little more assertive than she let on, but there’s a good give and take of energy between them. Robert pulls off her pants and sucks her cock, then kisses up her body. Laura returns the oral favor and mounts him cowgirl style. Spoons position proves to be even hotter, but they try out several other positions and finish in doggie, when Laura is the most vocal of all.

Christian XXX is back in the final scene, but this time he’s playing a recently dumped guy drinking his troubles away in a bar. A pair of exotic beauties named Doll (longer hair) and her friend Jane (bobbed hair) overhear him talking to the bartender and descend upon him. The bartender watches in amusement as he leaves with the women, overjoyed that he gets to have a threeway with two beautiful women. After kissing Jane and Doll and playing with their tits, Christian is stunned into disbelief when he sees what’s in their panties. “She’s still the same girl,” one of them says, and that’s enough to snap him out of his stupor. He continues to have the night of his life with these two uncommon beauties.