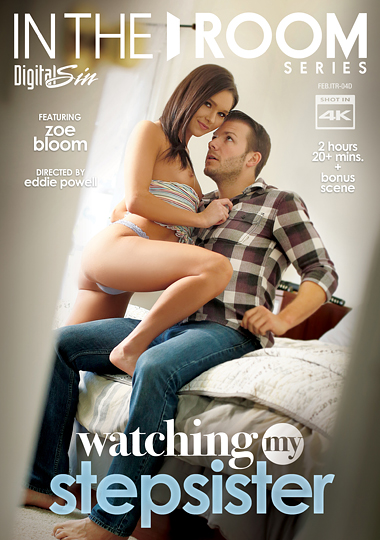 Zoe Bloom and her stepbrother Codey Steele loudly kiss and make out in his room with the door open, thinking no one else is in the house. When Zoe’s other stepbrother catches them in the act, Codey and Zoe offer to let him watch if he won’t tell their parents. He decides to go for it. Zoe moans and pants as Codey plays with her pussy, and tells her other stepbrother behind the camera that she sees him getting hard. For a while, Zoe makes eyes at the camera. She rides Codey in cowgirl position while she talks dirty, asking if you like watching her brother fuck her tight little hole, until the cum-spurting conclusion.

Jane Wilde thinks that Stirling Cooper, the computer repair tech who just fixed a laptop for her and her stepbrother, would be a good fit for their “arrangement” wherein she fucks a guy while her stepbrother watches. Stirling somewhat incredulously says yes and they get to the fun part. Jane’s low, sultry voice is boner-inducing as she tells you to stroke your dick the same way she strokes Stirling’s dick. She keeps up the filthy talk as he eats her ass and she prepares to go down on him. By the time he’s pummeling her pussy in doggy style on the bed, all she can do is grab on tight to the bed sheets and moan.

Aaliyah Hadid is nervous but excited because her stepbrother has given her the okay to fuck his best friend while he watches. She’s seen the bulge in his pants and knows she’s in for a big dick ride. Chad White shows up and starts kissing Aaliyah, asking about whether she’s ever thought about fucking her stepbrother. No, but she’s thought a lot about fucking Chad while her stepbrother watches. Aaliyah teases her stepbrother with words while Chad tweaks her nipples and kisses her neck. Later, Aaliyah makes a slobbery mess as she blows Chad and talks dirty to the camera. While bouncing up and down on him in cowgirl position, she gazes over her shoulder and tells you not to forget to stroke your cock as you watch. There’s no chance of anyone forgetting, because you won’t be able to help yourself as his fat cock tickles her tonsils and hits her G-spot.

Lisey Sweet has decided it’s finally time to tell her fiancé that she’s been fucking her stepbrother, Logan Pierce, for several years. There was a little bit of bondage involved. She says that she needs to get it out of her system by fucking and dominating him one last time while her fiancé watches. Lisey teases Logan as she talks dirty to the camera. After some 69, she pumps herself up and down on Logan’s dick and explains that she used to have to stuff her panties in his mouth to keep him quiet when they fucked. But they’re not worried about volume today, and Lisey is a screamer. She’s doubled up, knees under her chest, grabbing the blanket as Logan pounds her from behind. Later, she rubs her clit and begs you to keep time with Logan as he fucks her.

“Watching My Stepsister” is one seriously hot taboo POV flick. Don’t miss it!