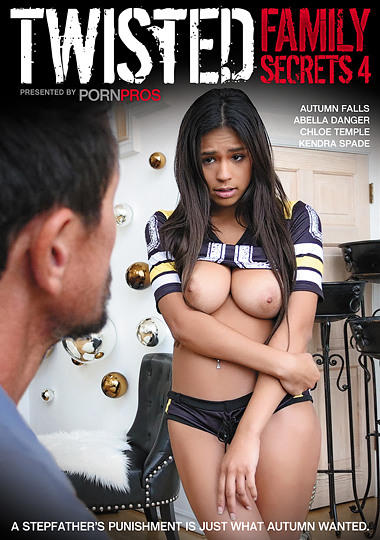 Chloe Temple, a babe with platinum blonde hair and tiny tits, cares a lot about her stepdad. She finds him working out in the home gym and he asks her to give his sore thigh a massage. Soon she notices that he’s sprouting a third leg, and she thinks it needs just as much attention! Chloe has little difficulty in talking her stepdad into showing it to her. He tries to put it back in his shorts after a minute, but Chloe begs to keep going. After jerking and sucking his big dick, she climbs on the weight bench with her daddy and rides him to a hot, orgasmic conclusion.

Sexy Asian teen Kendra Spade wakes up in the morning and has a long, satisfying session with her magic wand. While she’s taking a shower afterward, she looks out the window and catches her horny stepbrother watching her. After yelling at him for a minute, she pulls him closer and lets him know that it excites her to know that he’s perving on her. Kendra rubs the bulge in his pants and kisses his neck. He plays with her perky natural breasts as she pulls out his huge cock. Kendra kneels and deep-throats her stepbrother for several minutes before they move to the rug on the bathroom floor, where she lies back and lets him drill her wet twat.

Pretty, boobalicious Autumn Falls bounces around in a tight, crop-top football jersey, tossing a pigskin in the air and catching it. Her stepdad comes to watch her from the second floor landing (but we have a much better view of the underboob action). She tries to get him to toss the ball with her, but he reminds her that he’s already warned her not to throw the ball in the house. He tells her she needs to put on some more appropriate clothes and leaves the room. After Autumn breaks her mom’s favorite vase, her stepdad offers to help her stay out of trouble in exchange for letting him fuck her sweet teenage pussy. He just can’t stop thinking about this hot young Latina’s big tits, so he asks her to take off her shirt and jump up and down while he watches. When Autumn’s stepdad finds out that she’s as turned on as he is, he brings her to him and starts to suck her nipples. While her stepdad watches, Autumn lies back on the couch and finger-fucks herself so hard she squirts. She gets on her knees and blows him, but the main event is the POV-style fucking. After you see the way her boobs bounce as she rides him in RCG while rubbing her own clit, you won’t be able to stop thinking about them either. A “punishment” like this is only going to encourage Autumn to misbehave more often!

Sporting a blonde look with dark roots, super-fine Abella Danger opens her mail and freaks out about what she’s reading. Her stepdad comes to check on her when he hears her sobbing. Abella wants to wait and talk to her mom, but her stepdad persists. Finally Abella shows him the letter that says she’s only got weeks to live. Abella’s dying wish is for good sex, and her mom told her that his big dick was why she married him. In shock, her stepdad will do anything to help her feel better. He uses the vibrator on her while she sucks his big dick. Abella moans about how good this “last dick” is and gets off on his pussy-eating skills. She rubs her clit while he fucks her in doggy style and sidesaddle, among other positions. After a long, weird, but satisfying fuck, he cums in her mouth. They sit on the bed, both perplexed and satisfied, and he asks if he can see the letter again. She vaguely points at where she last saw it. This time, Abella’s stepdad notices that the letter was sent to her by mistake. On the plus side, Abella’s not dying. On the negative side, she’s just screwed her stepdad and her mom could be home any minute!