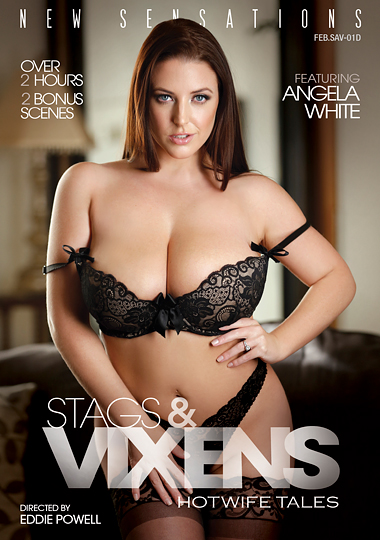 Married couples who have discovered the pleasures of open relationships are the subject of Stags and Vixens from New Sensations. More specifically, we get to watch these smoking hot wives fuck other men with the encouragement of their husbands, who are happy to share.

Makenna Blue is a cute young married babe with short blonde hair and a hot ass. While her husband is away on business, he’s cool with her fucking whoever she chooses, and she has chosen their helpful young neighbor, Logan Long. When Mackenna puts the moves on Logan he doesn’t believe this is happening, so she calls her husband on speakerphone and proves it. Makenna immediately gets to work on Logan’s thick cock, making it throb with arousal and enjoying every inch of it in her mouth, and then in her pussy. Logan strums her clit while she rides him in reverse cowgirl, her limber, gymnast-like body angled just right so that he can also suck one of her nipples. Makenna swallows his cum with a smile.

Slinky brunette Jessica Rex is horny while her musician husband is away on tour, so she decides to seduce her favorite massage therapist, Damon Dice. While lying on her back with just a towel covering her torso, Jessica asks Damon if he likes to fuck hard or soft. He’s taken aback, but she draws the answer out of him and gets him to answer honestly that he likes to fuck hard. Good, she says, because that’s how she wants him to fuck her. Damon is startled and reminds her that she’s married, but Jessica assures him that she and her husband have an open relationship. That’s all Damon needs to hear, and soon he’s using his skilled hands, searching mouth, and rock-hard cock to enjoy Jessica’s beautiful, all-natural body. Jessica’s moans and gasps let us know that this intimate massage is really working for her. She’s going to have quite a story to tell her husband later!

Young, beautiful, and blonde Lena Anderson married her husband when she was an 18-year-old virgin. She and her husband have an agreement in which she can fuck other men, since she never had the chance to experience any other cock besides his before. Now she’s fucking “her first Spaniard,” the older and dominant stud Ramon Nomar, who knows just how he wants her. Blindfolded, Lena submits to his every direction, trying to follow his cock with her greedy mouth as he playfully moves it around to challenge her. Ramon ravishes her sweet, nubile, natural body in all sorts of ways. Lena looks good enough to eat, her ass like a ripe peach as she bounces up and down on his dick. She is too exquisite for her husband to keep her all to himself!

Stags and Vixens from New Sensations makes open marriages look even better than you thought!