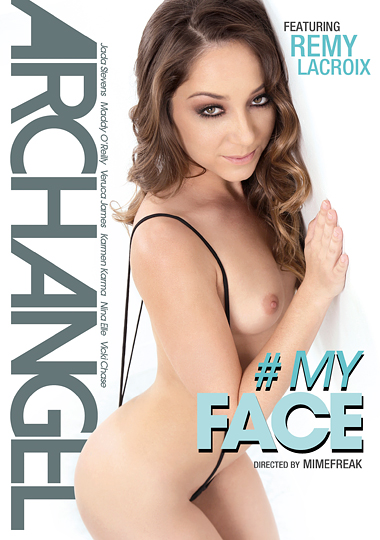 ArchAngel contract girl Remy LaCroix is naturally gorgeous in a floral bra and black panties that show butt cleavage. In the shower, she lets the water trickle down every lean curve. You’ll want to lick that water off her. When Sean Michaels arrives, she lavishes attention on his black sausage with her mouth and hands, producing copious slobber. Outside the shower, they towel off and Remy gives Sean a thorough working-over, testing her gag reflex and throat-fucking him hard. In the end, Sean pastes her pretty face with an impressive load.

Hot brunette Veruca James sizzles in lacy black lingerie. She tells us her greatest turn-on is getting skull fucked. Prince Yahshua appears and she soaks his anaconda with spit. He thrusts into her hungry mouth as she alternately strokes his shaft and her clit. Veruca fits a lot of him down her throat and licks his balls. On the couch, he plays with her ass while she sucks. Eventually he holds her up in a standing 69. At the end, Veruca gulps down his thick cream.

In pink panties, Karmen Karma shows off a sexy kiss tattoo on her ass. Naked, she talks about how she likes giving head. Gavin Kane arrives to let her demonstrate! She takes him way down her throat, producing lots of spit. Like Vicki, she hangs her head off the couch so he can drill deep. Vicki’s face is a sexy mess of slobber, and he adds to the sloppiness with his load.

Don’t miss this ball-draining release from the up and coming ArchAngel studio, oral enthusiasts!