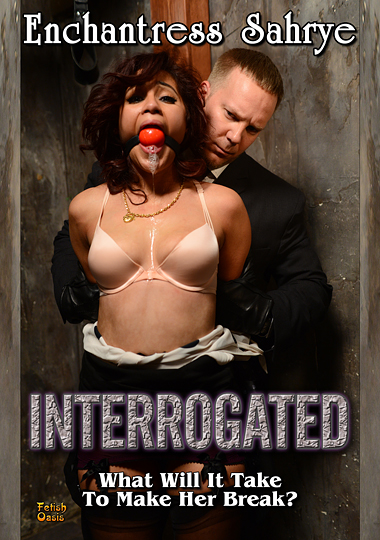 Accused of corporate espionage, Sahrye is abducted and brought to a dungeon. A threatening inquisitor and his menacing henchman subject her to a harsh interrogation, but this petite Latin powerhouse is a lot tougher than they thought.

Sahrye is dressed like the world’s naughtiest businesswoman in a snug white button-down blouse, an extremely short black skirt-suit, seamed stockings, and red-bottomed black stilettos (so nicely complemented by the ankle cuffs that it almost looks like they’re part of the design). The camera lovingly focuses on her shapely legs as she struggles on the floor. We hear her whimpers from beneath the bag over her head. When it’s pulled off, Sahrye’s dark eyes are full of fire behind her sexy wire-framed glasses.

A henchman (Brian Pierce) with a skeletal tattoo on one hand acts out the commands of an unseen inquisitor (M. R. Stewart). Nothing he does diminishes her feisty spirit or tames her smart mouth. Even in bondage with two creepy men punishing her, she fearlessly refuses to answer their questions about her real name or who hired her to spy on them. The henchman renders her unconscious.

Sahrye wakes up to find herself wrapped in plastic with a ball gag in her mouth. After slowly cutting her out of the plastic wrap with large scissors, the henchman slides the blades menacingly down her cleavage. He pulls open her blouse and hikes up her tiny skirt to put her bra and panties on display. After several more minutes of psychological intimidation, the unseen inquisitor has his henchman turn Sahrye over his knee for a good long spanking. We see it in slow motion, the sounds of the slaps punctuating her reverberating cries. Her tight, shapely cheeks bounce a little beneath her sexy sheer garter belt.

They interrogate her still more, but her spirit’s not broken. Sahrye is left in a cell, blindfolded, gagged, and exposed in her lingerie, with her arms chained above her head. Later her captors return to hoist her into the air. The henchman opens her front-clasping bra, leaving her perky tits exposed, and pulls off her shoes, garter, and stockings so he can flog her legs and feet. He flogs her naked back, then sets the flogger aside and caresses her tits, trying to soften her up so she’ll talk. But through the gag, instead of saying “Enough,” she tells them to suck her dick.

No amount of psychological berating or physical stress brings that one word out of Sahrye. By the time the end credits have rolled, it’s clear that it’s too late for her to save herself from this torment even if she wanted to.