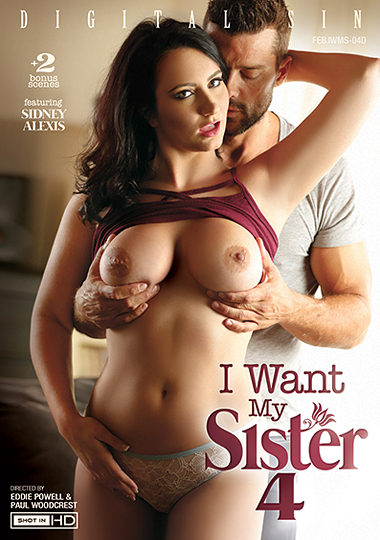 Digital Sin presents a quartet of hardcore scenes in which stepbrothers get busy with their stepsisters. I Want My Sister 4 is the latest in a taboo series that has given viewers plenty of fuck per buck.

Emma Hix is a hot blonde webcam model. Her brother, James Deen, has often watched her put on a show and thought about fucking her. One day he gets to live out that wet dream when one of her viewers offers her $10,000 to fuck her brother on camera. Eden and James are quick to agree, only bartering over his cut of the money. Then they kiss, undress, and take turns going down on each other. James especially enjoys the taste of her juices, it appears. These two really put on a show for their private viewer, because Emma is a hot, horny girl who looks fantastic when she’s being flipped and turned and bent into different sexual positions.

Sidney Alexis desperately misses her stepbrother Ramon, who’s her best friend. They did everything together—even did each other—until he decided to move back to his native Spain. As she plays with her pussy, Sidney fantasizes about him. He goes from kissing her mouth to pulling up her top and kissing her big, juicy, fat tits, the kind you could happily play with all day and all night. They alternate between oral sex and pussy pounding. Between positions, she snugly wraps her big tits around his throbbing dick for some insanely hot tit-fucking. While pounding away at Sidney’s fuck tunnel, he strokes her clit like a guitar player strums the strings. When he pauses to suck her clit and digs in for her g-spot with his fingers, Sidney squirts all over the couch!

Tiff Bannister is a cute blonde who knows her stepbrother has the hots for her. He’s been staring at her, imagining her naked as she does household chores. One day, as he’s trying to do some work, he glances up to see her sitting across the table from him without a shirt on, distracting him. She crawls naked across the desk toward her stepbrother and gives his face a hug with her boobs. Soon he’s got a hand on each of her plump natural tits, flicking his tongue across her hard nipples, and then he’s plunging his dick deep within her sugar walls. They suck and fuck in several positions before he blows his load. Snapping back to reality, he discovers that it was all part of the fantasy. Maybe someday dreams will cum true.

I Want My Stepsister 4 is new this week on AEBN.