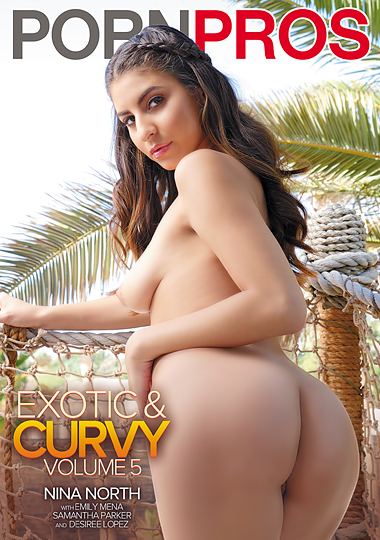 Emily Mena, a petite Latina, is popping out of her sports bra as she rolls and bounces on a balance ball, and she pulls a jump rope back and forth across her smooth pussy while the camera zooms in. She waits on the ball with her legs spread and her huge, round tits up out of the bra. When the guy reaches in to rip her little booty shorts apart at the crotch, the look of surprise and submission on her face is so stimulating. On the mat, she kneels to suck his cock and we see it at good side and POV angles. He fucks her tits some and then resumes fucking her face. Emily takes his big dick deep inside her pussy and rides him, and ends up with his load all over her round tits. She scoops some of it up, licks it off her fingers, and blows the camera a kiss.

Hot little Latina Nina North poses and swerves her hips around, and pours water on her naked tits. The camera zooms in lovingly on it all. She pulls her teal bikini to the side and plays with her smooth pussy. Soon her dude shows up and she eagerly engulfs his cock with her mouth. As she takes him inside her twat in all sorts of positions, Nina’s thick ass jiggles with his thrusts. Later he starts to rub his thumb over her pucker while she reaches between her legs to rub her clit. He lets go and the camera films the action from above as she slams her pussy against him while he stays still. A moment later, Nina takes the guy’s cum in her mouth.

Do not adjust your screen when Desiree Lopez appears, teasing in a bright violet lace bodysuit under a neon yellow bikini bottom. It’ll look like your screen has gone wonky but when the camera pulls back, you’ll see the colors are just fine. The lace clings to her thick ass and thighs, which she shakes for the camera as she lies back on the patio with her legs in the air. She hops into the pool and pours water all over her hard nipples. Inside the house, she’s naked and ready to fuck. The guy is on the couch, totally hard, when she crawls to him and sucks face while jerking him off.  He fucks her pussy first, but later Desiree gets on all fours and takes his dick hard and deep in her juicy ass!

Whether you like your girls bottom heavy or hourglass shaped, you’ll love the thick rumps of the four hotties in Exotic and Curvy 5, streaming exclusively on AEBN today!