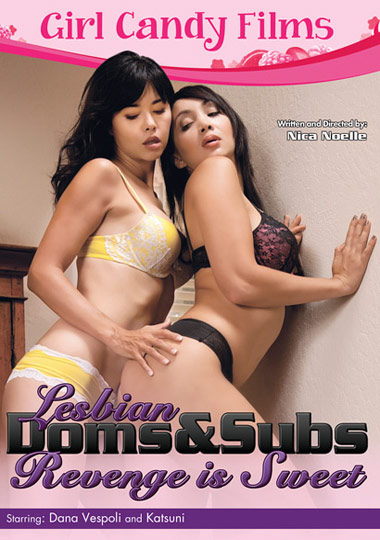 In Nica Noelle’s Lesbian Doms and Subs 2: Revenge is Sweet, writer Dana Vespoli goes to a ranch resort hoping to finish an article, but it’s clear she won’t get much writing done when in walks Colette (Katsuni), the gorgeous Asian goddess who wrecked her life in high school. Colette looks exactly the same, but Dana isn’t the overweight, awkward misfit that she was back then, so she decides to conquer her long-ago demons with sexual revenge.

Taking advantage of her different appearance, Dana traps Colette by pretending she’s too drunk to walk to her room alone. Once they get there, Dana’s miraculously sober and gets in Colette’s face, demanding to know if she recognizes her. An increasingly fearful Colette tries to escape, but Dana flings her onto the bed for a hard spanking. The fact that Colette doesn’t remember the torment she inflicted only infuriates Dana more.

Finally Colette remembers, or claims to, and says she wouldn’t do that now. Dana doesn’t believe her. She tells Colette to undress and proclaims her tits to be still perfect and firm. “I’ll bet my boyfriend had a really good time with those,” she says, sarcasm dripping from every word. Colette apologizes, but Dana wants her to prove she’s sorry. Dana admits to not being hot back then, but knows she is now. Colette agrees, looking at her sweetly.

Now Dana enjoys the body that lured her man away from her back then, despite or maybe because of her hatred of the woman. She notices that Colette isn’t trying to leave anymore and wants her to put up more of a fight. Taking off Colette’s pretty panties, Dana bites her ass. Colette fights back with her hands around Dana’s throat. She flips Dana onto her back and straddles her, spits in her mouth. The catfight arouses both of them, and by the time Colette has yanked off Dana’s shorts and panties to start eating her pussy, you’ll be on the edge of your seat.

Dana’s torso jerks and arches in spasms of pleasure as Colette clamps her mouth down on that pussy and sucks, wiggling her face back and forth on it. Now the high school bitch pulls her former victim by the hair and kisses her neck hard. The former enemies make love to each other’s mouths as they take off more clothes, and Colette starts to speak French (an insanely hot detail that makes Katsuni one of the sexiest women in porn). Back on top, Dana kisses Colette’s pebble-like nipples and dives between her lean thighs. She alternates between suction and licking.

You can see the hickey that Colette left on Dana’s neck as the women gradually wind down from their intense sex. Never doubt that both of these women are awesome to watch in girl-on-girl action.