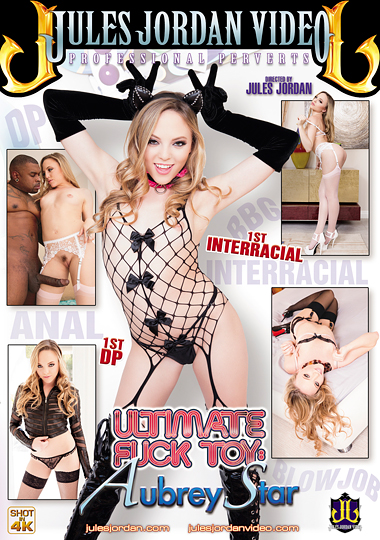 Beautiful newcomer Aubrey Star has landed a coveted Jules Jordan Video star vehicle. Ultimate Fuck Toy: Aubrey Star showcases the stunning blonde in her first interracial and first double penetration scenes. One thing you can practically take to the spank bank is that director Jules Jordan has an eye for talent. Aubrey might not be a big star yet, but if she’s good enough for JJV then she’s worth seeing. With her almond-shaped blue eyes and pouty lips, Aubrey is a beauty with a hard little body built for speed.

Ready to surprise her husband after work, Aubrey dresses in her best white, lacy lingerie and waits for him. He has a surprise, too: he brings Aubrey’s trainer home for her to fuck! It’s her first interracial scene and Rico Strong gets to introduce her to the BBC. The contrast of this porcelain-skinned, tiny blonde against his large, well-endowed, dark-skinned body makes for an arousing sight. While she’s enthusiastic and willing to work to fit him in, he’s equally strong and manhandles her just like she wants. They really go for it and it’s going to be hard for hubby to match that passion and chemistry.

Chris Strokes joins the returning Jules Jordan to blindfold and control the compliant Aubrey for a straightforward but exciting threeway. She looks good enough to eat, so they do. The sensory deprivation of the blindfold lets Aubrey focus on the aggressive face fucking and pussy pounding. After spit-roasting Aubrey, the guys cover her pretty face in spooge.

Gorgeous young Aubrey lives up to the high standard set by the previous volumes in the Ultimate Fuck Toy series.