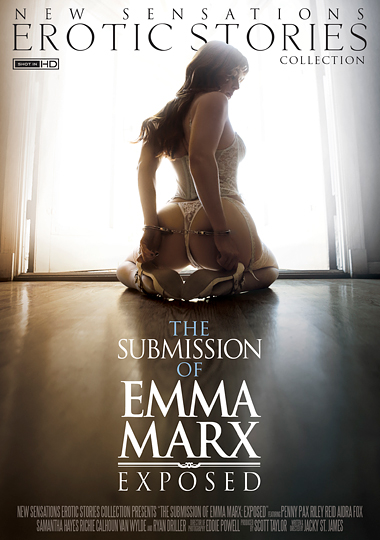 The Submission of Emma Marx trilogy concludes with The Submission of Emma Marx: Exposed. This popular, award-winning saga of soulful, kinky love has been a career-defining series for its two female powerhouses: star Penny Pax and director Jacky St. James. Parts one and two have been ranked among the greatest adult movies ever released, and the conclusion exceeds that high standard.

As Emma Marx and her Dom, William Frederick, Penny Pax and Richie Calhoun have powerful chemistry. They draw even more deeply from their already impressive wells of dramatic talent.

In the role of Emma’s sexy sister Nadia, Riley Reid is as hot and charming as ever. Van Wylde returns as her devoted husband, Ray. In the movie’s first scene, this hot duo shares a passionate tryst full of deep-throating, pussy-eating goodness and an intense fuck in doggy, cowgirl, spoons, and missionary. Their “strangers hooking up at a wedding reception” role-playing leads to a hotel room fuck that’s hot as hell. Afterward, Nadia calls Emma to tell her about it, not knowing that Emma is in the middle of a little bit of sex play herself at the time.

In flashback we see Mr. Frederick’s previous submissive, Audrina (Sara Luvv), ask him to fuck a girl she knows named Rebecca (Samantha Hayes). He grants her wish on the condition that she watches the whole thing. Audrina is visibly aroused during the foreplay and deep-throating, but her face falls when they begin fucking for real. Rebecca’s stunning body moves and bounces in all the best ways as she lets Mr. Frederick use her like a fuck doll. In the present day, Mr. Frederick tells Emma it’s not worth jeopardizing their relationship, as it drove him and Audrina apart.

That will not be the fate of Emma and Mr. Frederick’s relationship, as we find out when he lets her be his Dominant for one day only. Emma uses this as her chance to bring in a stunning girl (Aidra Fox) and share her with him. This threeway is explosive. The girls service Mr. Frederick together and play with each other, and everyone’s happy. In the end, Mr. Frederick has no doubt that Emma was right.

Read more to learn what happens next… spoilers!

Mr. Frederick leaves on a business trip the next day, but, tragically, his plane crashes and leaves no survivors. In her devastation, Emma moves back to L.A. to live with Nadia and Ray. She’s barely a ghost of her former self. But then the movie flashes forward, and we realize two years have passed.

Emma finally sets up a therapeutic relationship with a new Dominant named Michael Sullivan (Ryan Driller), in which she pays him to dominate her for a few hours every week. Michael’s patience and understanding help her back to the life she knows she was meant for, one of trust and submission. When he finally tasks her with holding eye contact with him for 30 seconds, Emma’s final wall breaks down.

She finally takes off the necklace from Mr. Frederick and enters the bedroom where Michael is waiting. He removes her lipstick and the black wig she’s always worn for their sessions before they make love for the first time. After a scene that is as loving as it is hot, Emma tells Michael that one day, she’s going to tell him her story. It’s the story that we’ve just watched over the span of three extraordinary movies.

The Submission of Emma Marx: Exposed is streaming on AEBN before its street date, so get into it now and you won’t have to wait!