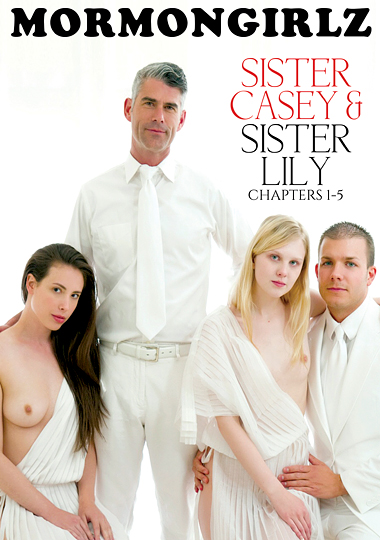 Sister Casey Calvert is a shy brunette who’s far cuter than she knows. Sister Lily Rader is a pretty blonde who is entirely ready to give in to temptation and to bring Casey with her. In Sister Casey and Sister Lily Chapters 1-5 from Mormon Girlz, the male leaders of the church find out about this secret lesbian crush and exploit it. The girls think that they’re going to be redeemed, when in fact they’re being corrupted and trained for sexual submission.

When Sister Lily meets with Brother Steele, she’s shocked that this young priesthood leader is so much more aggressive than all the other bishops. The questioning has always been invasive and even creepy, but Brother Steele treats her like he already knows and judges her sexual thoughts from the moment the interview begins. Sister Lily won’t be able to get through the interview without admitting to her lesbian thoughts. In fact, she’s done more than think about it. Brother Steele feels Lily’s vulva through her garments while asking if a girl has touched her there. He gropes her small tits and strips her naked. Finally, Lily has to show Brother Steele what she did, masturbating while he watches and gets harder. She surrenders to rough sex with this sinful church leader.

Next, it’s Sister Casey’s turn to meet with Brother Steele. Just being in the same room alone with this girl has the man’s cock straining to be free from his clothes, especially when he orders her to strip out of her robe so he can inspect her body. As his hands roam her velvety skin, touching her naturally perky breasts and tight ass, Sister Casey’s excitement threatens to boil over. He’s in complete control and it’s almost like being free to do anything, even the forbidden. After touching her clitoris and penetrating her virginal vagina with his fingers, Brother Steele pushes his throbbing cock inside her wetness and fucks her in a way she never dreamed could happen. After defiling her in missionary, sideways, doggy style, and even making her ride him like a cowgirl, Brother Steele cums inside Sister Casey.

While Lily is still high on the experience of losing her virginity to Brother Steele, Casey feels guilty and ashamed. She’s relieved to talk about it with Lily, who gets her to admit that there’s a part of her that loved it. Casey realizes that talking about sex with Brother Steele has freed her up to feel good about it instead of humiliated. Lily, who is crushing on Casey, talks her into inviting Brother Steele over to fuck them both at the same time. When he shows up with a video camera, Casey is horrified at the thought of video evidence of herself having sex out of wedlock—a threeway is sinful enough, let alone doing it in front of the world’s eyes—but it’s not long before she’s lost in the moment and stops caring who will see. As Casey and Lily eat each other’s sweet pussies through their sacred garments, Brother Steele watches until he can’t resist joining the fun. He pulls out his cock and the girls take turns sucking him. With his dick wet and so hard it almost hurts, Brother Steele penetrates the submissive, excited girls and fucks them. He seems especially drawn to Casey—it’s not just Lily who wants her badly.

Next in President Oaks’ office is Sister Lily, who feels no guilt at all. Having experienced the rapture of sex with young Brother Steele, Lily is equally excited to know what it’s like for an older man to have his way with her. President Oaks is a silver fox and she’s not ashamed to enjoy having sex with him, even though she “should” be. Lily can’t hide her pleasure as he licks her pussy and drives his cock deep inside her.

Sister Casey and Sister Lily, Chapters 1-5 is new to AEBN this week.