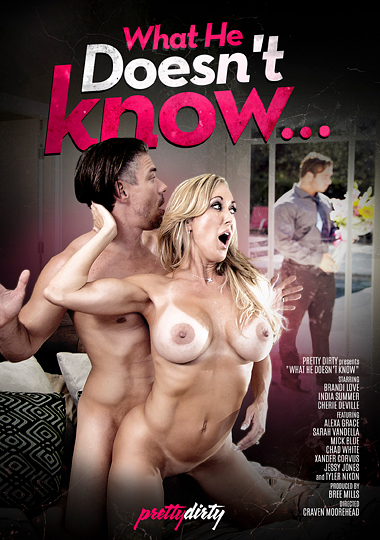 The thrill of getting caught really gets some women going. What He Doesn’t Know from Pretty Dirty is full of women who will do anything for a good orgasm, regardless of the potential consequences.

Brandi Love, a gorgeous blonde with huge tits and a fine ass, feeds her husband Chad White a good breakfast (not a euphemism) and sees him off to work. As soon as he’s out of the driveway, Brandi runs to let her lover Mick Blue in the back door (again, not a euphemism). She doesn’t know that Chad is, at that moment, deciding to skip work and return home to surprise her as a way of showing gratitude for her devotion. Mick is balls deep inside Brandi’s snatch when they see Chad walk past the window carrying a bouquet of flowers. Brandi rushes Mick into the bathroom so she can straighten the bed and put on a robe. When Chad finds Brandi in the bedroom, she pretends that she’s dressed like that because she was thinking about more ways to please him later. After getting Chad’s clothes off, Brandi goes down on his dick enthusiastically, like she’s trying to suck him till he pops, but Chad wants to fuck. Brandi excuses herself to the bathroom, where she squeezes in a little more suck-and-fuck time with Mick. Knowing the high risk of getting caught makes it hotter, but Brandi leaves Mick hanging for a while so Chad doesn’t get suspicious. Chad is totally oblivious because he’s high on Brandi’s good pussy. As they change positions, Brandi pretends she forgot something on the stove and rushes back to Mick, who pounds her pussy and cums on her face and tan-lined tits. Brandi wipes it off and runs back to finish off her husband. Chad jizzes on Brandi’s face, not knowing that this is sloppy seconds!

Cherie DeVille is a horny blonde cougar whose friend tells her about a food delivery service that employs hot guys. Turned on even more by the prospect of just ordering up a dude, Cherie texts a delivery guy she finds on the website and asks for a banana, whipped cream, strawberries, and lube. Tyler Nixon is taken aback but dutifully asks what kind of lube. Cherie doesn’t care what kind as long as he delivers. He never expected her to answer the door in lingerie and take him to bed, but he’s happy to lick the whipped cream from her nipples! Cherie uses the banana to show Tyler what she wants to do to him, sliding it between her huge tits. Tyler is now rock-hard, of course, so Cherie ditches the phallic fruit and slurps him up instead. On her back, Cherie spreads her legs wide so Tyler can return the oral favor. She slowly slides her wet twat down on Tyler’s erection, moaning and gasping as she feels a cock inside her for the first time in way too long. Tyler really delivers in all the ways that count, and as Cherie licks cum off her fingers and gives him a jizz-splashed grin, she promises to give him a five-star rating.

What He Doesn’t Know is exclusively available on AEBN.