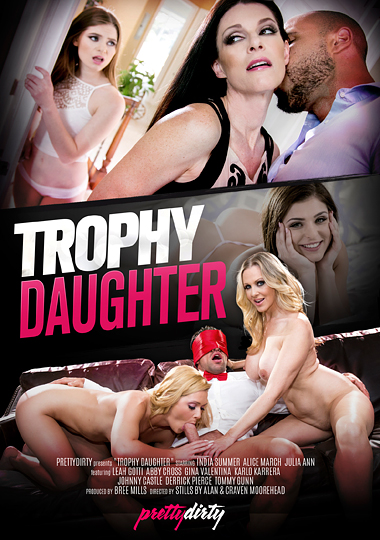 Ever since Leah Gotti’s mother passed, her overbearing stepdad, Derrick Pierce, has all but locked her up in a chastity belt. Now that she’s a sexy 18-year-old Leah wants to break free, so after Derrick literally chases a guy out of Leah’s bedroom, she decides that if he’s so interested in her virginity then he should be the one to take it. The only reasonable explanation for his obsession with her sex life is that he wants her. Derrick denies it, but he can’t resist when she pulls her shirt down and shoves his face into her gravity-defying tits, which are plump and natural. Leah’s persistence pays off, as Derrick’s stunned resistance gives way to him hungrily returning her kiss. He gets rock hard in her mouth, thanks to her oral skills. Leah rides Derrick hard, meeting his thrusts with her bounces. Derrick fucks her into multiple-orgasmic bliss, bending and stretching her into some fun positions. After going the distance for an impressive length of time, Derrick unloads all over Leah’s perfect titties.

Legendary MILF Julia Ann is a fun stepmom. She calls Johnny Castle, a magician who comes highly recommended from one of her friends, and hires him for a birthday party for her daughter, who loves magicians. Leaping at the chance to make some cash, Johnny heads over right away and is shocked to find Julia sitting naked on the couch with hot 18-year-old Abby Cross, who’s also in her birthday suit. Julia and Abby want to see what tricks Johnny has down his pants. The three of them all kiss together, and then the women service him as a team, Julia working his shaft while the birthday girl gets to suck his balls. Abby eats her stepmom’s pussy while Johnny moves in behind and starts to fuck her doggy style. Later he does another magic trick where he makes his dick disappear in Julia’s pussy. Johnny’s greatest trick is shooting a big load, followed by his own disappearing act at Julia’s request.

Cute little Alice March is possessive of Karlo Karrera, who adopted her and gave her the “daddy” she always wanted. When Karlo comes home from Las Vegas with a sexy new wife, India Summer, Alice acts more like a jilted lover. She interrupts the newlyweds’ make-out session, pretending that she heard noises downstairs and is too scared to be alone. India knows what daddy’s girl is up to and decides to challenge her. To Karlo’s shock, India and Alice commence a sexual duel where Karlo is both the playing field and the prize. India goads the jealous trophy daughter into increasingly depraved sex acts. Alice does her best to keep up with India as they take turns deep throating and fucking Karlo, whose length and girth stretch her teen pussy. The competitive duo milk Karlo’s balls dry and share the load, but after daddy heads to the shower, India lets Alice know who’s the boss.

Pretty Dirty is an exclusive taboo release on AEBN.