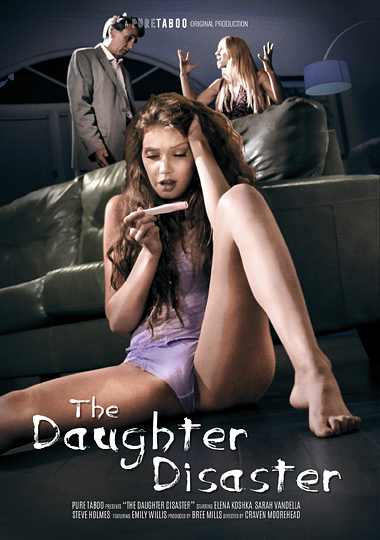 Elena Koshka is taking a pregnancy test at the beginning of the first scene. The camera doesn’t hold back as she sits down and pees on the stick. Her stepfather, Steve Holmes, knocks on the bathroom door and comes in to check his reflection before going to a job interview. He’s feeling so optimistic that he doesn’t notice Elena hiding something behind her back. After he leaves, Elena sees that the test shows she’s pregnant. We see flashbacks of the times when Elena had sex with her stepdad and then with her stepdad’s ex-boss. Elena slides down the wall, sobbing. She has to tell her mother, Sarah Vandella, that Steve whored her out to try and keep his last job, and when it didn’t work, Steve took out his anger by grudge-fucking her, his own stepdaughter. Far from taking Elena’s side, Sarah lashes out and tells her she’s been a slut ever since she turned 18. Sarah accuses her daughter of seducing her own stepfather and his boss, getting him fired.

By the time Steve gets home from his job interview, he finds his wife and stepdaughter in the middle of a screaming match about him. Sarah storms out, leaving Elena there fuming at Steve for letting her mom think she was lying. Steve tries to comfort Elena, but she’s having none of it.

When Steve tries to make up with Sarah, he lies and tells her that Elena did seduce his boss, and that even he couldn’t resist her, but he only loves Sarah and wants to make it better. Sarah says she just wants to forget it happened. They kiss and make up with passionate fucking. After he makes his wife cum, Steve can’t manage to finish himself. He blames it on stress and the couple agrees that he should try and resolve his issues with Elena. Instead, Steve decides that this gives him the opportunity to get into his stepdaughter’s pants again by lying and saying that he told her mother the truth. He tells her that he secretly wanted her anyway and coaxes her into admitting that she felt the same way. Now that Steve has regained Elena’s trust, he has no trouble getting her to let him fuck her again.

Pretty teen party girl Emily Willis tries to sneak back into the house early in the morning after staying out all night. Her stepfather, Steve Holmes, busts Emily and loses his temper. He doesn’t believe her claim that she spent the night at a friend’s house. When Emily admits that she needs a morning-after pill, Steve pushes her onto the couch and says he’s going to treat her like the slut she is. Steve tells his stepdaughter that she can either take a punishment from him or move out for good. Emily trembles with an intoxicating mixture of nerves and arousal. There’s one thing her stepdad is right about: she truly is a slut, and she wants him to spank and fuck her even though it’s wrong. Emily and Steve have a powerful connection as performers, making it easy to believe the story. More importantly, Emily is super hot and clearly enjoys Steve’s big dick.