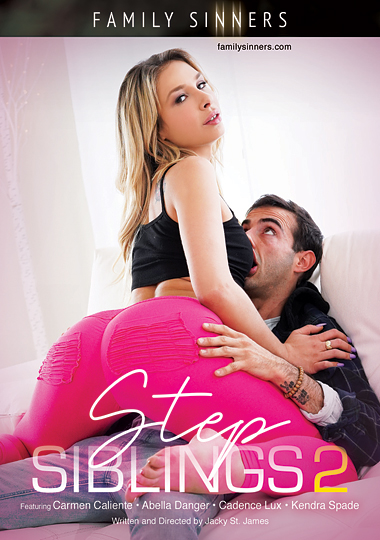 Sweet Sinner and director Jacky St. James have a taboo delight for us this week—four of them, really, because each scene in “Step Siblings 2” is as exciting as all the others. The girls are fire and the guys are lucky. If you had a stepsister this hot, you’d never want to leave the house.

Abella Danger confronts Zac Wild, her stepbrother, over what a mess he keeps leaving in the bathroom she has to share with him. He won’t clean the bathroom unless she kisses him, which she’s reluctant to do. But once she gives him one quick peck on the lips, Abella realizes she wants to keep going. Sitting down on the weight bench, he brings her onto his lap and she grinds against him as they keep kissing harder. He pulls down her red sports bra and sucks her tits. Zac rubs Abella’s clit through her white panties, then pulls them off and eats her out. After he makes her cum, she pulls out his cock and gives it a long, eager suck. But what he really wants now is to fuck, so she turns around and he buries his dick to the hilt in Abella’s tight snatch. She rides him in cowgirl and RCG. As he fucks her in mish, she rubs her clit and sucks his thumb. He pulls out and unloads on her belly.

Years ago, stepsiblings Cadence Lux and Lucas Frost got drunk and kissed. She’s been in love with him ever since. Cadence knows that Lucas only notices her anymore if she’s dating someone, so she makes it a point to flaunt her love life in front of him. When he finds out that she’s about to give up her virginity to an older guy, Lucas chases the dude off and tells her she can do better. Cadence tells him that if he’s not going to let some other guy fuck her, then he needs to do it himself, because she’s tired of being a virgin. This argument convinces Lucas, and he pulls her in for a kiss. Placing her on the kitchen counter, he sucks her tits and eats her pussy. She gets on her knees and lovingly worships his cock with her mouth. Eventually they adjourn to a bed, where Lucas penetrates her pussy with his fingers and then slowly enters her with his dick. Once she’s loosened up, though, Cadence is ready to ride and takes on a more active role. Cadence really makes you believe this is the moment she’s losing her cherry, making it one hell of a hot scene.

Carmen Caliente’s new stepbrother, Jake Adams, has been obsessed with her ever since he was out at a strip club with friends and found out she’s a pole dancer. One day he comes home to find her practicing some ass gyrations on the living room couch. Her movements seem very different in this light, airy room with lots of windows, in broad daylight, inspiring him to try and shame her for her job. Carmen isn’t having any of his moralizing—he was there at the strip club, too. She decides to give him a lap dance to remind him that even stepsisters can be sexual women. But then she hops off his lap after getting him worked up. Now she knows that he’s putty in her hands. Her point is made, so they work out a deal where they can fuck right now and her mom doesn’t have to know that she’s working as a stripper. Carmen really knows how to brace herself against the couch with her hands and back it up onto him, getting involved in the fucking and not just letting it happen to her. He might be a hypocrite, but he’s a good lay!

“Step Siblings 2” from Family Sinners is brand new on AEBN this week.