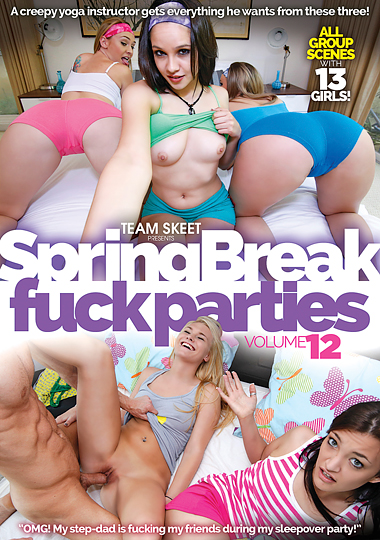 Team Skeet’s great at showing us hot girls just hanging out doing the sexy things that guys always imagine them doing when there are no guys around. Spring Break Fuck Parties 12 is a collection of four scenes that build up to the action with just that kind of thing, and the hanging out is like foreplay, priming us for the main event.

Cadey Mercury, Iggy Amore, and Harley Jade are chatting by the pool until Ryan, their “yoga instructor,” shows up to give them a private class (while secretly recording them in their tiny shorts and sports bras). The girls are fit because they’re young, but they’ve never done yoga. When he starts getting too intimate for their liking, the girls suspect that he’s not legit. After they notice the camera, they decide to give him something really worth recording. The girls commandeer his camera and his cock, getting some video evidence that will end his career if they post it online. There’s plenty of smack talk as the sucking and fucking continue. He gets to cum, but then he’s got to go.

Jade Nile, Leigh Rose, Casey Lane, and Miranda Miller are hanging out by the pool on Spring Break, getting some sun and catching up after not seeing each other for months. When the peeping Tom next door’s drone crashes in the yard, they decide to take it hostage. It’s Spring Break and they don’t have a care in the world for today, so why not give the guy something more than a show and enjoy themselves in the process? Jade, Leigh, Casey, and Miranda take turns sucking the guy’s cock, then let him eat their pussies and fuck them all in turn. The whole time, the sexy party girls enjoy playing with each other’s natural tits, perky booties, and wet pussies. After an awesome time dipping his dick in four hot mouths and twats, the guy pastes all of the girls’ boobs with a massive load of cum.

Spring Break Fuck Parties 12 is all about the hot teenage party girls getting into some shenanigans with older men! It’s streaming exclusively on AEBN VOD.