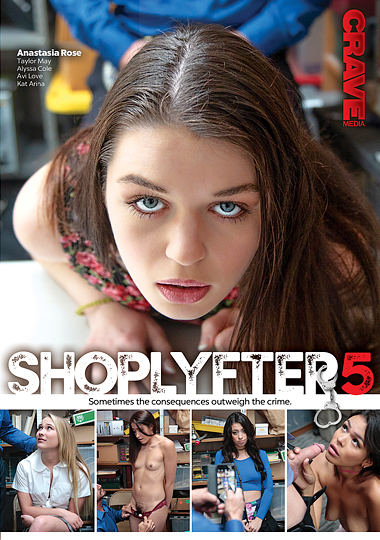 Crave Media’s hot and seedy reality-based series about teenage thieves returns this week with “ShopLyfter 5.” When these girls are caught red-handed, the fun part for the loss prevention officers is making sure they won’t do it again.

Tall, slender Latin hottie Kat Arina is busted after a store employee notices her purse getting fatter. The store’s loss prevention officer nabs her and takes her to the back room, where he finds all kinds of merchandise stuffed in her bag. Kat says she will pay for it, but the LP officer has something other than money in mind. He says she probably stole the clothes on her body, too, and they’ll have to come off. Then, Kat gives up her hot mouth and pussy to him in a sweet submission.

Taylor May, a slim beauty with long brown hair and perky 34C tits, has been caught on camera stuffing expensive merchandise into her clothes. The price for this is going to be a lot steeper than Taylor ever would have imagined, as the LP officer takes action to discourage her from reoffending. She’s never going to forget the strip search, or gagging on his big dick, or bending over the desk as her pussy is pounded.

Alyssa Cole, a long-haired blonde beauty, has been doing a lot of stealing with a group of her fellow schoolgirls. When they finally get caught on camera, all the other teens bail on Alyssa and leave her alone to deal with the consequences. In spite of this betrayal, Alyssa won’t rat out her accomplices until the loss prevention officer claims that all of them did the same to her. Even then, she wants immunity. But first, Alyssa submits to a strip search and a thorough, unconventional body cavity search with the LP officer’s cock!