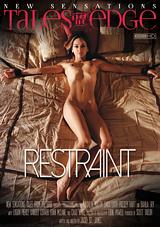 Xander Corvus and Sara Luv appear to be an ordinary, sweet, suburban couple. Literally as soon as they’re behind closed doors, he’s bending her over the kitchen table for a spanking. Sara has a high-powered career, but at home she’s her husband’s sub. The Dominant/submissive dynamic really grills their cheese, and you can see it in the way Sara’s nipples could cut glass when he fucks her on the edge of the bed and then straps her down, diddles her throbbing clit like a gambling addict with a scratch-off ticket, and makes her beg permission before she can have an orgasm.

On the night of their third anniversary, Presley Hart presents her husband, Ryan McLane, with a blindfold that she wants him to put on her. It’s their noisy-cumming next door neighbor’s secret to sexual success, Presley says, but Ryan has to work past his doubts. He knows it’ll make her happy if they try it, and boy does it ever. Almost immediately Presley’s letting him know in no uncertain terms just how happy it’s making her. Presley’s moans, sighs, and gasps heighten his own excitement and her hot body quivers with building pleasure. She might not be able to see, but she knows just what to do: if she can’t find his cock, she’ll ask him to take it out for her. Their fucking grows hotter by the second until she cums like a rocket and he pops on her well-shaped ass. The next time they hear their neighbor screaming her head off during sex, Ryan decides they should get even louder.

Restraint is a must-see couples’ movie that ventures beyond the vanilla and into the spice.