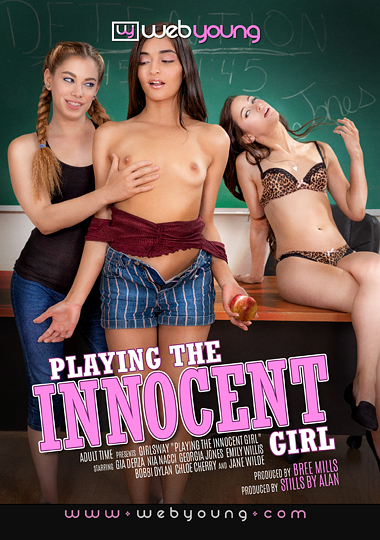 “Playing Innocent” stars Gia Derza and Nia Nacci as a pair of mischievous, curious friends playing Go Fish in Gia’s bedroom. Tall and leggy Nia is a gorgeous Black teen whose natural 32DDs draw Gia’s attention every time she reaches for cards. Nia starts talking about feeling hot, as in temperature, but it could easily be her way of communicating the heat she feels for Gia, a blue-eyed stunner with 34D tits that are alluring in their own right. Gia agrees that’s feeling a little stuffy in there, but she decides to jack up the thermostat and give them the excuse to get out of their pesky clothes. Once they’re both naked, the next natural step is to feel each other up, make out, and get each other off!

In “Dirty Detention,” slinky brunette Georgia Jones is a substitute teacher whose detention students, dark brunette Emily Willis and auburn-haired Bobbi Dylan, try to sneak in late without being seen. Bobbi recognizes Georgia from a porn scene that she watched online, so she looks it up on her phone and shows it to Emily. Georgia grabs the phone, trying to confiscate it, when she recognizes herself on the screen. Instead of being angry, Georgia first asks the girls if they’re even old enough to watch it (yes, they’re 18). She quizzes them on whether they like what they see, whether they paid to see it, and whether they’ve ever been with a woman before. When Georgia finds out that the girls are inexperienced with lesbian sex, she slowly strips for them to show off what they’ve just seen on the video. She invites them to touch and suck her small but perfectly perky tits. The schoolgirls and their teacher are all too excited not to take it all the way now! Georgia gives Emily and Bobbi an unforgettable lesson in eating pussy and then some in this threeway that makes detention look like a fun place to be for these two bad girls!

Jane Wilde convinces her friend Chloe Cherry to play Spin the Bottle in “Leaving Nothing to Chance.” Chloe, a slim, ivory-skinned blonde, isn’t sure why her friend wants to play this game. Jane, a blonde spinner with natural 32B tits, convinces her shy pal that it’s practice for a party they’re going to that night where they’ll get the chance to make out with a bunch of other girls. It turns out Chloe has only ever kissed Jane before, and she thinks they only need each other to have some fun. Jane wants Chloe to enjoy experimenting with a lot of partners during her college years, so she’s using this one-on-one game to help her relax. To prove a point, Jane tells Chloe to keep her eyes closed as they suck, finger, and trib each other to orgasm. As long as she’s not looking, Jane says, Chloe won’t even know who’s making her feel so good. Now that’s what you call a pre-game!