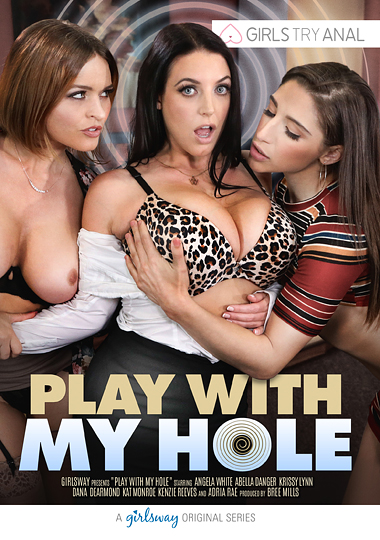 Kat Monroe is a gorgeous young blonde who has befriended a married lesbian couple, brunette Dana DeArmond and busty blonde Bridgette B. The mature cougars took her out to dinner for her birthday and now they’re showing her around their house. She’s fun and cute, but they’re not sure they want to invite her into their lives on a long-term basis as their girlfriend. They’re not sure their families could handle that, as it’s been difficult enough for them to accept their marriage. Kat pleads her case to them, so Bridgette—in her husky voice—proposes a trial run in which they fuck her ass with a dildo and strap-ons. “You have two?” Kat asks when she, mounting Bridgette’s strap-on, sees Dana putting on her own fake dong so that the wives can double-penetrate her with them. Afterward, as Kat jousts with both strap-ons, Bridgette says she thinks they should keep her.

Kenzie Reeves just found out that her boyfriend cheated on her, so she goes to her best friend, Adria Rae, for comfort. When Kenzie cries that she thought her boyfriend was “the one,” Adria wisely points out that she’s still young. Kenzie decides that she just wants to stop talking about it, so Adria proposes a game to take Kenzie’s mind off her heartache. The game is Never Have I Ever, and you don’t need a group to play it. After playing it for a bit, Adria suggests that strip-Never Have I Ever would be even more fun. Kenzie agrees, and the point of no return happens when Adria reveals that she has kissed a girl. It makes Kenzie realize that she needs to experiment more. Kissing and fucking her best friend is the best way to experience lesbian sex for the first time, and Adria is happy to introduce her to several firsts—including anal play.

Each of these three scenes gives just enough story to motivate the action. The girls and women are gorgeous. “Play With My Hole” is totally enjoyable and it’s streaming in 4K, only on AEBN VOD.