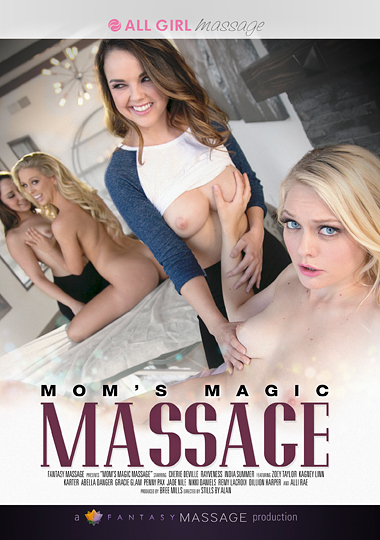 Zoey Taylor’s husband drags her along reluctantly to watch football at his sister Kagney Linn Karter’s house. Kagney hit on Zoey the only other time they met, at the couple’s wedding, and Zoey is scared of it happening again. The moment the couple arrives, Kagney boldly and persistently hits on Zoey while the husband ignores them in favor of the game. Kagney is a massage therapist and she insists on massaging the tension out of Zoey’s body. Zoey reluctantly takes off her dress and bra, leaving her panties on as she lies face-down on the massage table. Eventually Kagney works her way down to Zoey’s bubble butt and convinces her sister-in-law that the panties need to come off or they’ll get all oily. Kagney later coaxes Zoey into letting her massage her front, and after she concentrates on those luscious tits, she gets to her pussy and gives it some attention too. Zoey’s husband leaves to buy some alcohol and Kagney finally has her way with her. As Kagney sucks her clit and brings her pleasure she didn’t know she wanted, Zoey has to admit the advantages of having a lesbian sister-in-law.

For Mother’s Day, Abella Danger takes her hot stepmother Rayveness to see her friend Gracie Glam, a massage therapist. Rayveness doesn’t know that Gracie specializes in sensual massages, a fact that becomes clear soon enough. As she watches Gracie stroke her stepmom’s sexy nude body, Abella gets so turned on she has to participate. She starts by rubbing Rayveness’ feet, but gradually the girls convince the MILF that the massage will be best if she’s uncovered. It’s best for them, too, granting them easy access. While Gracie laps up Rayveness’ pussy, Abella worships her stepmother’s large breasts. Eventually the three women are all bringing each other leg-shaking orgasms! This will definitely not be the last mother-daughter massage appointment they make with Gracie.

Homesick student Penny Pax calls her step-cousin Jade Nile, who suggests she visit even though Jade will be the only one at home. Penny welcomes the chance to enjoy some bonding time. At Jade’s house the girls give each other pedicures and take a trip down memory lane. Opening up to each other emotionally leads to a physical bonding as well, especially when Jade asks Penny to practice the massage techniques she’s learning at school. Penny’s sensual touches unlock feelings in both girls that they soon explore, having the whole house to themselves for the weekend. Now Penny will go back to school with a big smile, having experienced her first taboo lesbian sex.

India Summer and Nikki Daniels are all grown up now and haven’t seen each other for a while, but the stepsisters take full advantage of a weekend reunion with nobody else around. Nikki comes into India’s room and they lie on the bed talking about their crazy teen adventures. They used to party hard and then keep each other warm at night, but the wildest times of all were their first forays into lesbian lovemaking. What fun would a stepsister reunion be if they didn’t take advantage of this time for some breast-worshiping, pussy-licking nostalgia?