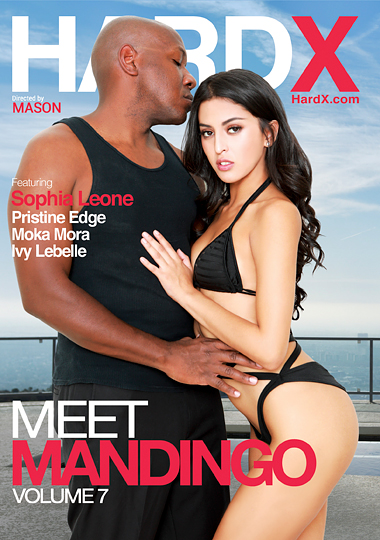 Pristine Edge, a hot starlet with dark blonde hair and a talent for fucking, is back for her second go-round with Mandingo. She’s a size queen who craves BBC, especially Mandingo’s. Before her scene she gushes about how great he can make a woman feel. After some deep, breathy kissing and breast play, Pristine does her best to fit all twelve thick inches down her throat. When she jerks his cock, you can see that she would need another pair of hands to cover the entire length! Once his dick is completely wet with her slobber, she gets off on him fucking her in doggy style, missionary, cowgirl, RCG, and more.

Moka Mora is another Latin beauty who loves dark chocolate and can’t wait to have her first taste of Mandingo. There’s no interview for these two: the first shot of the scene is Moka’s big ass all up in the camera with his hand groping and squeezing it. Moka kisses Mandingo as she pulls down his pants. She tentatively licks his cockhead while stroking the shaft, and then gradually sinks her face further down onto it. He’s a lot of man for one girl’s mouth, but she gives it all she’s got, including some good ball sucking. As she’s getting ready to take him in her pussy, Moka shakes her ass for the camera and smacks her cheeks a few times, moaning “Ay, papi” just above a whisper. Her bilingual dirty talking is like a good, healthy dousing of Valentina on top. Mandingo feeds her his cum and she scoops up some that dripped onto her chest, then shows off the load in her mouth before swallowing.

“Meet Mandingo 7” is a hot new interracial release from Hard X that you can stream only on AEBN VOD. Don’t miss it!