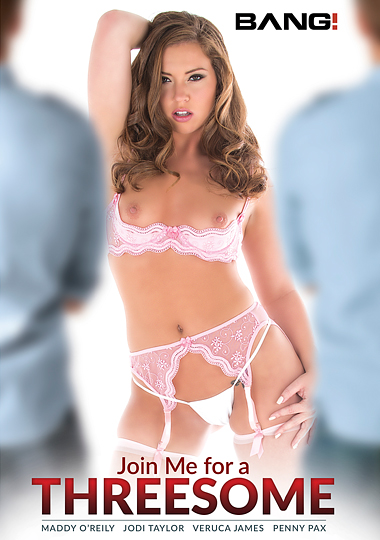 Maddy O’Reilly says that she’s shy when she isn’t fucking. Once she starts getting naked, the red-headed tigress emerges. The camera zooms in as she makes her thick booty clap. Maddy sensually puts on stockings, pointing her toes at the camera. The director hands her a big, clear dildo to suck and put in her ass. She fucks herself anally with it and then sucks it clean. The director brings in Ramon. Maddy squeals as he lifts her hair and walks her over to the corner so he can stand on the couch arm and fuck her face. On her tiptoes in uneven stockings, with her natural breasts poking out of her pink bra and her garter belt dangling over her bare pussy, she looks hot and disheveled. Erik Everhard enters and Maddy hungrily alternates sucking each of their cocks, getting sloppy and excited. Within minutes she’s on top of Ramon, who’s fucking her pussy as Erik drills her ass. Maddy gasps and hollers about how open her asshole is, repeating it like she’s drunk on dick. They switch places a few times and Maddy is lost in DP ecstasy, not even minding when Ramon writes “BANG!” on her forehead as he and Erik are getting closer to popping. When the guys have both doused her face in spunk, the director calls in more guys to jerk off and add their own loads.

The two guys who are going to fuck Veruca James show up before she does. One of them, Markus Dupree, is a Russian newcomer to the US who has done DPs with Rocco Siffredi and just won AVN Male Performer of the Year 2018. Veruca isn’t sure what to make of Markus at first, because he seems so shy and youthful, but he turns out to be the more active and charismatic fucker once the action starts. If you’ve never seen Veruca in action, get ready for a wild ride. She excitedly takes a cock in the ass and a foot in the mouth. One guy teabags her while slapping her tits and the other drills her ass. Sweaty and reddened, Veruca doesn’t mind getting messy in the pursuit of bliss. After both guys cum on her face and in her mouth, they write “BANG” on her forehead and… something in Russian on her chest. This girl revels in circus-act sex, so she could do a threeway as -a warm-up before other scenes. But she never brings less than her best. Any time Veruca gets a chance to take two cocks at a time, she’s in heaven!

Penny Pax, a beautiful redhead with gorgeous legs and tits, excitedly says yes to rough sex, whether it’s her personal life or on camera. The director says every guy he works with tells him to hire her. She quickly proves why that’s the case. Penny thought this was just a go-see and didn’t expect to fuck, but she’s raring to go when the guys show up. One of them rips her shirt and stuffs it in her mouth as a gag, while Markus (back from scene three) holds her from behind. Penny visibly goes to her happy place when they treat her like a fuck doll. The guys push her around, pull her hair, stuff both of her holes with their big, Russian dicks, and she loves every minute. Whether Penny is jousting with their cocks or getting double penetrated, her pleasure is written all over her face—just like the word “WHORE” is written on her chest later, along with another Russian word on her belly that surely means something similar. She sucks the loads out of the guys and smiles when they paint her face with cum.