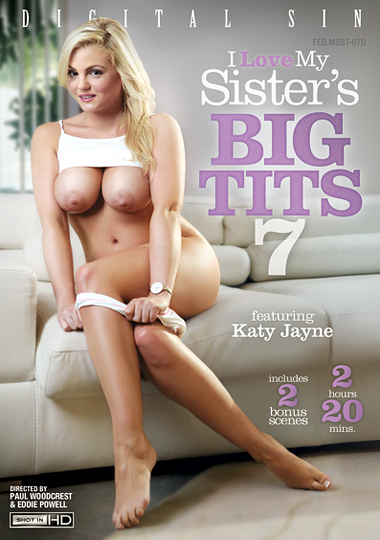 Lena Paul, a gorgeous brunette with big blue eyes, catches her stepbrother Lucas Frost lighting a cigarette and angrily threatens to rat him out to Mom. He’s willing to do anything to keep her quiet and she takes advantage of that, pulling down her shirt and bra to show her plump natural boobs and stiff nipples. Lucas whirls Lena around, presses her against the wall, and kisses her hard. He takes her to bed, where he takes some time to explore her beautiful natural endowments and licks her clit, getting her even more excited. Lena shows her stepbrother all the fun he can have with her massive mammaries, giving him a tit-wank to remember and letting him grab them as he thrusts into her wet pussy. And then, after they fuck in several positions, he coats those admirable chesticles in jizz.

Pretty brunette Ivy Rose has a special relationship with her stepbrother Mick Blue, who’s ten years older and has been a mentor to her. When he moves overseas to pursue his photography career, Ivy is heartbroken, so her mom pays for her to visit him for a couple of weeks. After the visit flies by, Ivy can’t leave without fucking him like she has always fantasized about doing. Mick has obviously thought about it too. He plays with her big natural breasts and goes down on her, and then she sucks his big, hard dick. Mick focuses plenty of attention on Ivy’s big natural breasts as they fuck hard and deep. Their passion and chemistry radiate through the screen, and the load he paints her pretty face with is thick and creamy.

Tyler Nixon lovingly admires his hot stepsister Brenna Sparks’ bra in the laundry room, smelling it and cupping it in his hands. He finds her in the living room and awkwardly chats with her for a minute. Later, she’s in the shower and Tyler notices that the door’s open. He tries to run past the door before she notices, but she knows he’s there. After her shower, Brenna finds Tyler on the couch and asks directly: “Do you want to fuck your sister?” Tyler stammers out a denial but soon enough, he’s got his mouth planted on those huge, round tits of hers. He fucks Brenna’s titties and eats her out. She opens wide so he can fuck her mouth before he pounds her pussy every which way. Tyler pulls out and blasts her face with his cum, meaning she needs another shower before their mom and dad get home!

Chad White also sees his beautiful blonde stepsister Katy Jayne in the shower, lathering up her fat titties and thick booty and thighs. She smiles, knowing that he’s there, but he runs off. Later, in the kitchen, Katy says she knows Chad liked what he saw, and is disappointed only when he’s afraid to act on it. In her sexy British accent, Katy tries to talk him into fucking her. Finally, she just chases him down and pulls his face into her bountiful cleavage. He slides his raging erection in between her magnificent boobs, and later makes them bounce hypnotically when she rides him in reverse cowgirl. She looks down at them, watching them dance, and you can’t help getting even more turned on knowing that she likes seeing her own tits bounce. He pulls out and gives her a facial that spills down onto her magnificent rack.

These sexy sisters are proud to share their boobalicious bodies with their brothers, and we love them for it!