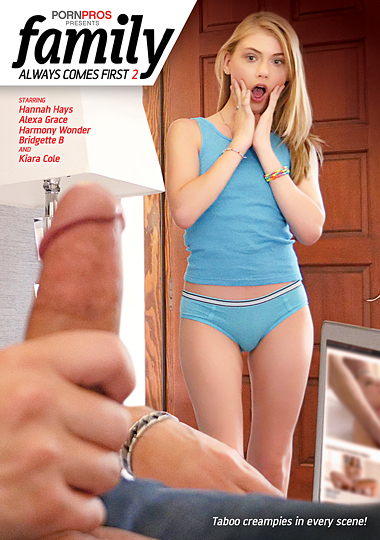 Sexy, long-haired blonde Alexa Grace sways and struts through the house in a white tube dress with rainbow stripes at the top, highlighting her small tits. She finds her stepbrother in the kitchen, washing dishes, and taps him on the shoulder. Alexa asks if they can fool around while their parents are out of town over the weekend. She’s been sexually frustrated and wants to use his cock for relief. In exchange for the sexual favor, Alexa says he can cum in her pussy. She turns and bends over the counter, showing off her ass. When she turns around, her dress has “accidentally” fallen down to show her tiny boobs with hard nipples. As she traces the outline of her labia through her thin white panties, Alexa offers to be his cum dumpster. She doesn’t need to say another word: dude is quickly pulling the cotton sheath aside and tickling her clit with his tongue. We get a long, close look at him licking her bald snatch, bringing her to the brink of orgasm, before she welcomes his throbbing dick in between her sugar walls and encourages him to keep pounding until he injects her with his hot spunk. When he pulls out, it’s like a dam has burst. But they’re not done—the ride continues for a good while longer, now that both of them have gotten that initial blast of sexual energy out, they can take their time. Alexa sucks a giant second load out of him and into her thirsty mouth.

Kiara Cole, a slim teen with long, platinum pigtails and a resemblance to Daenerys Targaryen, has brought an older guy home to go skinny dipping in the family’s luxurious pool with a scenic view. Her stepdad sees this from the balcony and goes to intervene. After chasing the guy off, he brings Kiara inside to show her how to respect the house rules. Kiara cleverly gets his mind off punishing her and satisfies her own urges at the same time, saying she’s turned on and wants him to fuck her. All of her stepdad’s anger vanishes as Kiara gets on her knees and blows him. Soon, stepdaddy is fucking her tight young hole until he blasts her with an enormous load. It feels so good they keep going, so that he fills her up a second time…and a third time… and, actually, you’ll lose count, but suffice it to say this girl is a cummy mess by the halfway point and it gets even creamier from there!

It’s Halloween, so busty MILF Bridgette B and her stepdaughter, Latin babe Harmony Wonder, dress up in sexy maid uniforms to give Bridgette’s new man a treat. All the men in the neighborhood know this is the house with the best candy, but there’s just one visitor tonight. Bridgette and Harmony answer the door in matching black corsets with tiny skirts and fishnets. Bridgette’s bountiful rack overflows as she stands beside sweet-faced, sexy Harmony, who’s excited to meet her new “stepdaddy.” They welcome him in as Bridgette tells him how excited Harmony has been to meet him and see his big dick. The ladies have no trouble seducing him into a threeway. Mommy and daughter love to share a man, especially when they each get a cream pie.