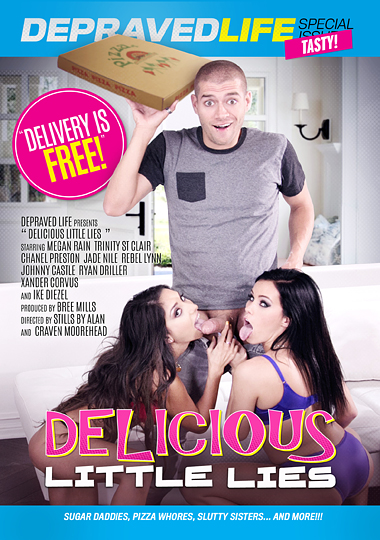 Sexy brunette Chanel Preston and her hunky ex-husband, Johnny Castle, happen to run into each other one day, and each of them is obviously pleased to see the other. They’re both reminiscing about how good their sex life was together. When Chanel invites Johnny over for “pie,” the double meaning isn’t too hard to grasp. Chanel texts Johnny when he gets there to let him know where to go into the house. Johnny hears his hot ex-wife’s moans right away and follows the sound. She’s wearing some of Johnny’s favorite lingerie as her new husband Ryan Driller fucks her up against the side of the bed. Chanel and Ryan invite Johnny in for a threeway. For Chanel, the good old days with her ex were never this good, because now she gets a dick at each end and a double cream pie!

Jade Nile is texting with Xander Corvus, the rock star she’s fucking. He wants a threeway with her and a virgin, which just so happens to apply to her stepsister, Rebel Lynn, who’s got a huge crush on him. Rebel is hanging out with Jade, unaware that her sister has been doing any of this, up until the moment when Jade makes the offer. Of course Rebel is into the idea of fucking her rock star idol, but first thing they have to do is get Xander’s approval of some naked pics. Then, Jade decides her stepsister needs some girl-on-girl training so that she can impress Xander later.

Chanel Preston returns as a hot girl trying to get presents, vacations, and more out of her potential new sugar daddy, Ike Diezel. Ike will promise the busty beauty anything she wants, but his only goal is to bang her sweet pussy. When Chanel finds out that her gold-digging ways only netted her some fool’s gold, she decides the best revenge is to dominate him. The sex was better than she would like to admit, so at least she can humiliate the lying scrub with one last foot-worshiping fuck.