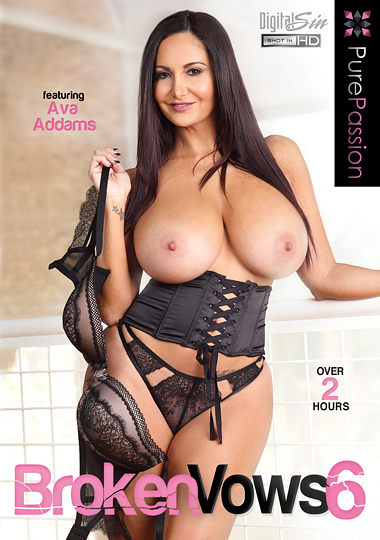 Sometimes, the lust is too strong for a wife to keep her body off another man’s body. In Broken Vows 6 from Pure Passion, wives forget their wedding rings as they get their hands on fresh meat.

When naturally stunning Spanish babe Alexa Tomas goes to teach a private yoga session, she wants much more than a stretch. This is a new kind of hot yoga. All that hands-on assistance during the deeper stretches gets both of them worked up, and soon he’s tasting her tits and she’s savoring his cock. He licks her pussy, getting her even wetter before plunging inside. Later, Alexa needs to get anally fucked and he’s excited to oblige. They fuck in many positions on the couch and on the floor before he feeds his hot load into her thirsty mouth.

When busty blonde Brandi Love accidentally spills some wine on her lover’s shirt, it’s all the excuse they need to rip each other’s clothes off on the spot. Brandi hops on the kitchen counter, where he excitedly sucks her tits and eats her pussy. She takes him into the living room and worships his big, uncircumcised dick and full balls, lubing him with plenty of spit as she looks into the camera. When he fucks her big tits in P.O.V., it’s hard not to pop! Later, he bends Brandi over on the couch and pounds her from behind. She mounts him, riding as slowly or vigorously as she wants, making her booty bounce. Brandi cums when he gives her a hot cream pie, and we get a good close-up of semen spilling out of her pussy.