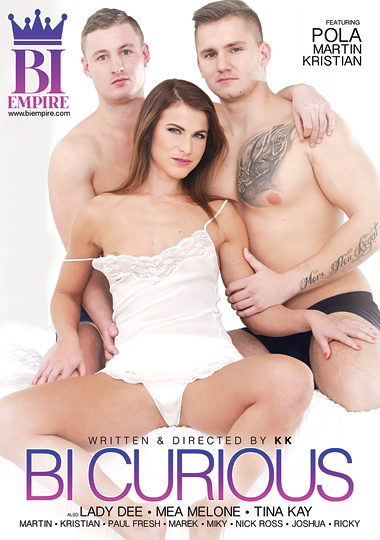 Slinky brunette Tina Kay has been with dark-haired Marek for about six months and they’re ready to take their sex lives to new heights. Tina had the great idea to invite another guy in for a threeway, Marek agreed, and now they’re going to indulge their fantasy with blond hunk Paul Fresh. Immediately Tina takes charge, ordering the two studs to stuff their faces into her pussy and ass. From there she directs them to suck each other, lick her naturally ample tits, fuck her, and fuck each other too. Marek ends up covered in his own spunk and Paul’s too. Tina is stunning, the guys are hot, and together the three of them make for one of the most gorgeous MFM threesomes you could want to watch.

Ricky is a sandy-haired guy with movie star looks and his girlfriend of two years, Mea Malone, is a sexy brunette with natural boobs that are more than a handful. Joshua is a dark-haired younger hunk whom they’ve asked to join them to spice up their relationship. Ricky and Mea are swingers and Mea is really excited to watch Ricky fuck another man. Mea takes some good, deep dick from the guys, and eagerly helps out with some sucking and stroking at all other times. Joshua takes Ricky’s creamy load in the mouth and hungrily licks it all up as horny Mea watches approvingly.

If you’re looking for some truly passionate bisexual fucking, you won’t go wrong with Bi Curious.