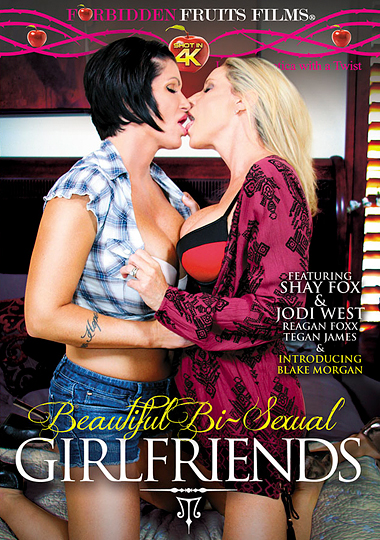 Up first, Jodi introduces her friend Tegan James, whom she’s wanted to have sex with for months. Tegan, like Jodi, is a blonde with big tits, only Tegan’s are bigger and rounder. The women are both into kissing, which they do for a long moment before taking turns sucking each other’s nipples and eating each other out. They’re obviously both excited to be having sex with each other, so watching them is hotter than your average lesbian scene!

Even more volcanic is the scene between Jodi, Kennedy Leigh, and Dakota Skye. Jodi walks out to the pool and finds Kennedy (her lover’s daughter) and Dakota playing around. Rather than get upset or shocked, Jodi dares the girls to join her in bed if they really want to have some fun, and she drops her bathing suit behind her on the patio as she saunters back into the house. Kennedy and Dakota want to see why Kennedy’s mom is so infatuated with Jodi, so they find her lounging in bed with her left tit already popping out of her black lace robe. The girls lick and suck Jodi’s large tits, and Jodi in turn samples their nipples and pussies. For a grand finale, Kennedy and Dakota eat Jodi’s pussy together.

Dark-haired Reagan Foxx and dirty blonde Blake Morgan have known each other for a while and wanted to play with each other, but the closest they’ve ever gotten was fucking other people in the same room at a party. Now is their chance to find out what they’ve been missing and the result is a scorching scene of mutual clit licking.

In a swimming pool, older babe Elexis Monroe flirts with cute young Jaye Summers. They start to kiss as Jaye admits that she’s been interested in girls for a long time. Then they move to the cabana, where they can get a little more comfortable and taste each other’s wet, chlorine-flavored tits and pussies!