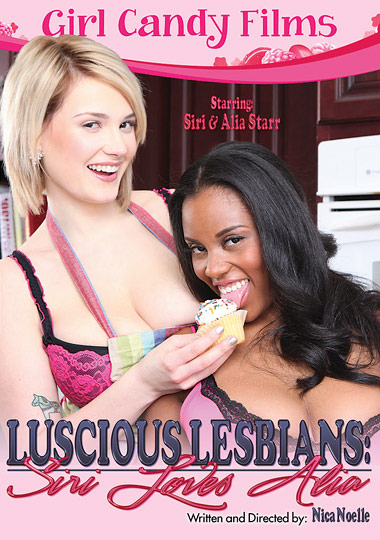 Siri is the ideal dream girl for those who like pale blondes with plush, naturally endowed bodies. Alia Starr is also naturally stacked, with gorgeous cocoa skin; long, dark hair; and a brilliant smile. These two gorgeous young women are a sensual match made in paradise for Girl Candy Films’ Luscious Lesbians: Siri Loves Alia, an exclusive title to our theater network.

We see Siri’s and Alia’s separate interviews spliced together before the scene begins. They each talk about what they find attractive about each other and what they want to do to each other. It’s a nice bit of tease to get the viewer even more excited at the prospect of seeing these naturally busty goddesses having sex.

The girls make cupcakes, but their flirtatious energy finds an outlet when Alia applies a line of frosting to Siri’s forearm and Siri informs her that she has to lick it off. Siri retaliates and there’s a little bit of fun back-and-forth between them. Soon they’re in the bedroom trying to lick off the frosting, which leads to kissing and mutual exploration of each other’s fantastic bodies.

Wanting to give Siri the same pleasure, Alia worships the blonde beauty’s pussy with her tongue and even her tit. She massages Siri’s clit with one of her nipples, a move that’s always hot on those too-infrequent occasions when we get to see it.

Watching these naturally voluptuous beauties play together is a visual feast not to be missed. They have a genuine physical chemistry and a sense of fun that makes it twice as hot.