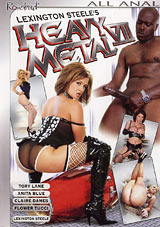 My buddy Lexington Steele is a busy guy, but in Heavy Metal 7 he finds time to do a sequel to an old series. He hadn’t done anything with it in five years. That is a lot in human years, but almost nothing in monster years.

Clare Dames likes the fetish shit and leather stuff. She looks all tough, but she ain’t so bad ass when she can’t breathe because of all the nostril glue Lex puts into her. He should have fucked her nose first. It’s a hole, right? That would be some funny shit.

Then there is Anita Blue. She whines a lot about stuff, but Lex ignores her and fucks her ass good. He dumps his goo on her and then wails on her ass after he’s done just to get some anger out. He tears into that slut real hard.

Black dicks/white chicks interracial ass pounding. man, that’s some good stuff. Ain’t quite like a big yellow monster dick but Lex is one cool brotha with the women’s asses.