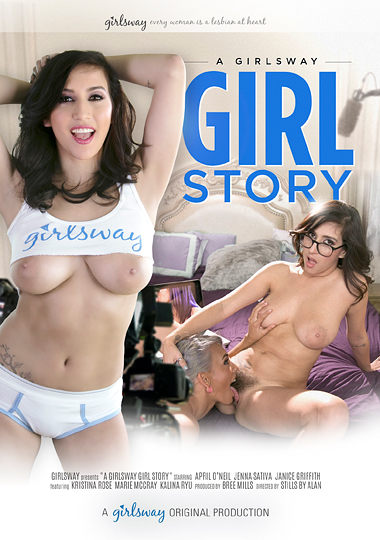 Adorable redhead Marie McCray wants to get over a breakup, so her friend hooks her up with an ex. It’s Kalina Ryu, a scorching hot Asian babe with a good job and a beautiful house. The girls make small talk over lunch and talk a walk afterward to a patio with an outdoor bed, where the date takes an erotic turn. Marie isn’t sure about sex on the first date, but Kalina convinces her that the best way to heal a broken heart is by moving on with her life. As they start kissing, Kalina and Marie help each other strip, getting gigglier and more aroused the further they go. Marie spreads her legs so that Kalina can taste her clit while finger-banging her bald pussy. Then it’s Marie’s turn to go down, which Kalina makes more fun with a rather gymnastic pose. The ladies come to a climax by grinding their clits together, driving Marie even wilder than having her pussy eaten! After Marie and Kalina have worn themselves out, it’s time for a nap.

April is in the car leaving the set and calls her girlfriend, Janice Griffith, to make sure she’s okay with her going to Kristina’s house for a scene. Janice accuses April of wanting to find even more girls to screw. After they end the call, April decides to go anyway. At Kristina’s house, the girls agree to shoot a POV scene for Kristina’s site, and Kristina will give April a copy of the file and hook her up with a webmaster to start her own site. They pick out something for April to wear that looks nice with Kristina’s outfit, and then take pictures of each other before they fuck. Kristina and April take turns holding the camera as they suck each other’s tits and eat each other out, bringing powerful orgasms out of each other. It’s nice work if you can get it!

When April gets home, she finds Janice masturbating to one of her scenes and finds it a little weird. Janice points out that she is April’s biggest fan. It’s been a long day and April doesn’t really feel like having sex, but Janice needs to feel wanted. April would like to keep Janice happy, so she goes down on her and indulges her curiosity about tribbing, even though April says it’s something they only do in the movies because it looks good. You can see that April hasn’t lost that loving feeling for Janice no matter how many times she’s fucked that day!

A Girlsway Girl Story is exclusively available on AEBN.