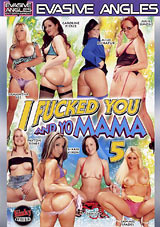 I Fucked You and Yo Mama 5

It would figure that I get less fucking just when the guys in I Fucked You and Yo Mamma 5 are getting twice as much pussy. They get to bang a hot girl and her mom at the same time. I never did two at once, but I fuck so fast that kind of feels that way.

Anyway, these black dudes got the biggest dicks and they’re hitting some plump juicy white booty. Oh, yeah…big ol’…mmmm  hmmm! That’s good shit! The dudes get two asses and pussies and two sets of tits for doing NOTHING! Monsters gotta hunt for their pussy all the time.

Julie Simone and daughter Sammie Spades actually argue over which of their bf’s cocks are bigger. I don’t know how they fight when they are both sucking a big black mongo dick, but brotha got one sitting on his face and fucking the other one too.

Danica jiggles her body around her room in a red bikini. Her slit and asshole are awesome. Delivery guy delivers a Cash-On-Delivery package and then a CUM-On Delivery package into her boo-coo tight pussy hole. MILF mom Milo Dickatur comes home from work while they fuck and she digs some big black cock and wants some. Girl got silver rings through her pointy nipples. You could hang some towels from there. He drops his load on Milo’s tits then wants his money too…heh heh. Big balls on that dude to go wantin’ his money after getting his dick sucked, hoo yeah.