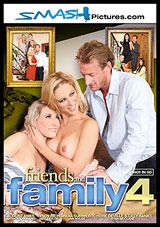 Anthony enjoys a late night rendezvous with his daughter, August. She’s a lean brunette who takes after her mother, India, whom they believe to be asleep. To welcome her daddy, August flings back the covers and reveals her curvaceous, naked body. They give each other head and fuck all over her bed.

India wasn’t asleep – she heard it and she’s furious. The fallout splits the family. August returns to her dorm. Anthony won’t move out, so India and son Van go stay with her sister (Cheri) and Cheri’s family while they look for a new house.

Soon, though, we discover that the filial follies are even more widespread at chez Cheri. Slender blonde Tysen wants to play doctor with her own brother, Jake. Lilly asks to watch her mom and dad (Cheri and Ryan) suck and fuck so she can “learn how.” Reluctantly, the couple gives their daughter some private Sex Ed tutoring and it turns into a threeway.

Keeping it in the family really runs in the family. For a movie that truly smashes societal conventions, look no further than Friends and Family 4. It’s now streaming exclusively on our VOD theater network.