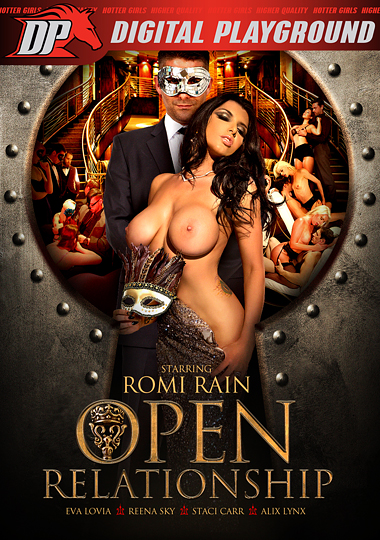 Gorgeous, buxom brunette Romi Rain and her husband Danny Mountain have active sex lives, and not only with each other. Romi’s doing a fabulous job of slobbing Danny’s knob when Staci Carr calls from the office, looking for sex. Staci’s sexual frustration wins out and Danny leaves for “work.” It’s okay, because Romi’s boy toy Seth Gamble comes over to play after Danny leaves. Romi’s friend Reena Sky spies on them from outside the house as Seth eats Romi’s pussy on the kitchen counter. Reena begins to masturbate as Romi greedily licks and sucks every inch of Seth, from balls to cockhead. Spurred on by the boisterous sounds of fucking, Reena sits on a bench, gets her tits out, and pulls up her dress. She finger-fucks her furry pussy and plays with her

At the office, the only work Danny does is some intense fucking with Staci. She’s a sexy blonde with natural tits that look great as she bobs for balls and takes a pussy pounding. A particularly hot moment happens when she lies against him in seated reverse cowgirl and he wraps his big hand around her petite throat, making her legs quiver and her abdomen shiver. He holds her waist and bounces her on his dick. As Staci rides him in cowgirl, her pussy wet and tight around him, Danny plays with her butthole and his eyes roll back in his head. They end their hot office rendezvous on a boardroom table and he finishes with a load on her pretty face.

Reena is at her therapist John Strong’s office discussing her conflicting emotions over what she saw that morning. Not knowing that Romi and Danny have an open marriage, she’s disgusted that her friend is unfaithful—and yet she watched them and masturbated in plain sight until she came. It’s been too long since she had sex, so when John offers to relieve her tension she leaps at the chance. After she services his dick and balls he starts spooning her on the couch.

Reena bounces on John in cowgirl, sucks her juices off him, and mounts him in reverse. He fucks her best of all in doggie. Reena’s sweat and heavy breathing show you how much she needed this. Judging by her dick-drunk gaze as John pops in her mouth, she’ll be enjoying these therapy sessions a lot more hereafter.

DP Star 2015 winner Eva Lovia can’t get access to the files she needs for a presentation. Ryan Driller shows up looking for access to her. At first Eva’s annoyed by the distraction and worried they’ll get busted, but Ryan points out that the possibility of getting caught is exciting. He gets her on the conference table where they take turns orally servicing each other. Then he fucks her in standing doggy up against the table, pulling her leg up high for deeper penetration. Eva mounts Ryan in cowgirl and we see a delicious view of her booty. He fucks her in several positions, all of which show off her luscious body in all its glory, and finally cums inside her.

Reena comes over to help Romi pick out a dress for a masquerade ball that evening. Romi flirts, knowing the effect her body is having, and coaxes Reena out of her clothes under the pretense of letting her try on a dress. Once they’re both naked, Romi shows Reena why she should never be shy about her body. Kissing passionately, fondling each other’s perfect tits, and eating each other’s pussies, they bring each other to intense clitoral orgasms using only their tongues and fingers. But don’t mistake this for some soft, gentle type of lesbian scene—Romi likes to finger-fuck a little rough with her hand on Reena’s throat, and she likes to eat pussy in some unusual positions. They make each other cum after some hot 69 and scissoring.

Danny and Ryan show up to the party, where people are sucking and fucking in every available spot. Meanwhile Romi wanders the rooms, taking it all in, when a masked man sweeps her into a hot kiss and walks away, leaving her breathless. As she continues through the rooms, two hot girls in masks (Latina Josie Jagger and blonde Alix Lynx) lead Danny and Ryan to a bedroom for a foursome. Josie deep-throats Ryan as Alix worships Danny’s cock and balls. While Danny fucks Alix in cowgirl, Ryan drills Josie missionary style. The guys and girls fuck and suck in a few positions before swapping partners. Unbeknownst to Danny, Romi is watching while he’s balls-deep in Josie’s twat. Smiling, she leaves the room with the masked man who kissed her as the foursome carries on to its cum-splashing conclusion.

where he stuffs his fingers down her throat slowly and pulls her legs open to finger her pussy. He briefly eats her ass before switching to missionary anal, and it’s in this hard-driving position that he plunges his hand in her pussy to make her squirt all over the bed. Drenched in her juices and delirious, she climbs on in reverse and swivels her hips around with him buried in her asshole. Toni switches from hole to hole and makes her cry out for more. Romi hops off and sucks his cock straight from her ass, takes him in doggie and missionary, and deep-throats him till she drains every drop of his load onto her messy but still beautiful face.

Danny is waiting for his happy wife outside and they leave the party together, blissed out. If they have the energy left after such a fuck-filled day, you can imagine the sex they will have together. That’s a tale for another time, as the credits roll on this hot movie.

Open Relationship from Digital Playground is now streaming on the AEBN network.