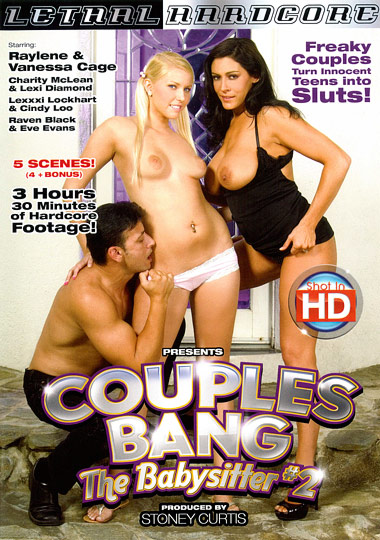 After Raylene meets and “accidentally” feels up the new babysitter, blonde Vanessa Cage, she phones her husband Mario to tell him how cute the girl is. When he gets home, he quizzes Vanessa on her taste in men and women, and finds out they’re gonna get along just fine. They’re in the midst of “getting along” with her shirt pulled up and Mario’s hand between her legs when Raylene gets home and pretends to be pissed off. Lucky Mario gets to watch the babysitter eat his wife’s pussy while the girl plays with his stiffening cock. Then Raylene and Vanessa turn their attention to Mario’s thick, curved dick, sucking it along with the balls. Raylene wants to watch her husband fuck the babysitter’s tight pussy, proving herself to be a dream wife. Vanessa’s handful-sized tits bounce nicely with every thrust and Raylene gives them some attention. Mario switches between fucking the two women so that nobody is neglected and then splits his load between both of their faces. Everyone is happy with Vanessa’s performance, so these three will be seeing more of each other.

Lexxxi Lockhart and her man Billy are tired of the swinger party scene, so they decide to see if their babysitter Cindy Loo would be into a little overtime. The money will be better than usual and it’s way more fun than her usual duties. She happens to have a huge phone bill that month, so she reluctantly agrees to their proposition of doing a “striptease” for them. Of course, that’s not all they want but she’s already naked, so why not suck some cock and let Lexxxi eat her out? Cindy is as cute as can be with her bright blue eyes and golden pigtails, pale skin and perky tits. She looks great being impaled on Billy’s thick cock and really appears to enjoy it. Lexxxi is a little fleshier and tanner than Cindy, with nice big tits. The three of them have a lot more fun than the couple ever had at their swinger parties.

Latina Lexi Diamond is another porn newbie. When the couple who hired her leaves, she glances through the sliding glass door, guesses that the kids are sleeping, and decides to catch the last rays of afternoon sun. The thing is she hates tan lines. Charity McLean and her husband come home early (because she left her phone) to find a naked babysitter sunning herself on their patio. Lexi claims that she grew up in a nudist colony and being naked is comfortable. Charity is furious, but her husband likes what he sees. It turns out the couple are swingers, so when Charity comes back outside from checking the kids (who are indeed asleep) and sees him licking Lexi’s asshole, she decides to join the fun. They go back into the living room, where the girls work over the husband’s cock and take turns riding it. Lexi’s dark skin, black hair, and light-colored eyes are an exotically sexy combination. She’s skinny as a rail with mosquito bites for tits, a sharp contrast to the busty, muscular, blonde Charity. The husband enjoys them both, and who could blame him? Lexi is the one babysitter who looks like a slinky seductress, probably because she’s the only one who doesn’t wear her hair in pigtails.

If you have a thing for threeways between older couples and younger girls, then “Couples Bang the Babysitter 2” is a solid choice for some spankable action.