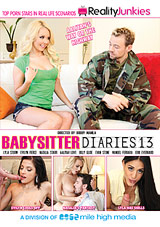 The things babysitters get up to with their employers would be enough to fill an anthology of filthy diary entries. Of course, if you’re more of a visual person, then you’ll be glad there is a series like this so they can show, not tell. Babysitter Diaries 13 just goes to show that we never get tired of watching the latest batch of cute, sexy teen girls fucking their bosses, who apparently aren’t getting what they need from their baby mommas.

Well, in the case of Lyla Storm, the “baby” she’s sitting is an injured Billy Glide. When an old sports injury starts to bother Billy, his wife hires Lyla to take care of him. She does so in more ways than one! You know where things are heading as soon as she offers him a back massage. Billy turns over and the hugeness of his erection inspires Lyla to give him a happy ending.

Evilyn Fierce and her boss, Evan Stone, are relaxing on a scorching summer day with some ice water. The girl really knows what she’s doing with that ice, and it has nothing to do with cooling off at all. Things heat up fast once Evan gets an eyeful of the way she massages her firm young body with ice.

Erik Everhard finds babysitter Aaliyah Love sleeping on the couch when he gets home. He tries not to wake her, but she’s a light sleeper. Aaliyah starts hitting on Erik after she wakes up, but he likes his girls a bit closer to his own age. This is not a girl who gives up easily, and she basically throws herself at him. She’s hot and she’s old enough, why not?

Babysitter Diaries 13 is streaming exclusively on our VOD network.