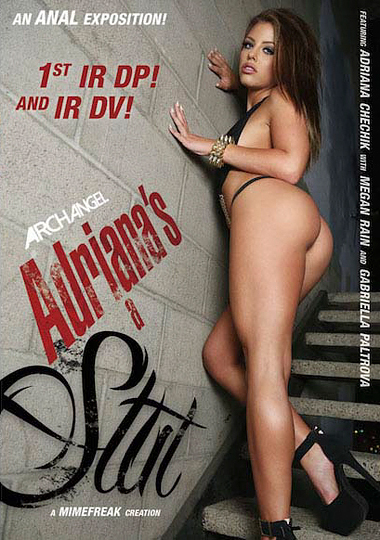 Adriana teams up on Criss Strokes with the gorgeous Megan Rain, currently nominated for XBIZ’s Best New Starlet. But first, the two delicious girls have plenty of fun on their own. Criss arrives with a bottle of oil, slicks up their voluptuous little bodies, and makes them shine. Adriana and Megan test their gag reflexes on his fat cock. While Adriana deep-throats him, Megan tickles his taint with her tongue. Criss porks them both vaginally and anally, and the girls suck his cock fresh from each other’s hot little asses. After pulling out of Adriana’s bunghole, Criss cums on Megan’s face and the girls kiss to share the load. Megan matches Adriana’s energy and sluttiness in a scene with excellent replay value.

Black studs Sean Michaels and Rico Strong enact one of Adriana’s fantasies, nabbing her off the street and taking her to Prince Yahshua in a warehouse. They tie her to a chair and Prince gets into his role as a menacing captor, ripping her clothes before tearing off her restraints and fucking her face. As he’s balls deep in her pussy, Rico and Sean insist upon joining because they’re the ones who brought her. Face down, ass up, Adriana gets every hole stuffed. We get to witness her first interracial double penetration and first interracial double vaginal penetration in this wild scene. Adriana ends up with all three loads in her mouth.

Directed by MimeFreak, Adriana’s a Slut captures this luscious lady at her lascivious best. It’s been nominated for Performer Showcase of the Year by XBIZ, and rightly so. Don’t miss a single minute of her fantastically nasty antics.