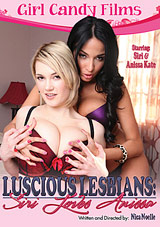 Siri is a scrumptious blonde with a doll-like face and voluptuous curves that stiffen cocks and moisten pussies everywhere. Her huge, soft tits look so inviting, making you dream of touching and tasting them. No wonder Nica Noelle’s devoted a new collection of scenes to her! This series is the first of what could be another smash-hit new series for Noelle and Girl Candy Films, titled Luscious Lesbians. We’ve already reviewed the first scene, Siri Loves Alia, co-starring the naturally busty black porn starlet Alia Starr. Now there are two new scenes featured this week, so we’ve decided to tell you a little bit about each one.

Exotic, impossibly yet naturally gorgeous Anissa Kate joins Siri for the second vignette of the series, Siri Loves Anissa. With her sexy French accent and her mocha-skinned North African beauty, Anissa is downright luscious. She’s the kind of woman that some write songs about and others — jealous others — stare daggers at, but Siri is lucky enough to make love to her in a scene that’s just over half an hour long. Both women have mouth-watering big natural breasts, soft skin, and sensuality that radiates through the screen. Your reviewer can’t get enough of 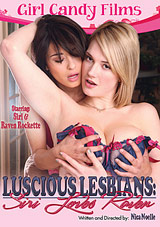 These scenes are available exclusively on our theater network.